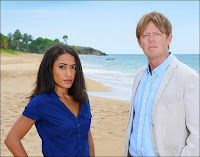 The one with the dead friend, followed by the one in the hotel.

After a slow but nice start, the sixth series of BBC One's tropical cluedo goes on with a couple of episodes regrettably deprived of vitality and group dynamic. This year it's DS Florence Cassell (Joséphine Jobert) who loses a friend. And the romantic weekend between DI Humphrey Goodman (Kris Marshall) and Martha Lloyd (Sally Bretton) in an island hotel turns into business as usual for Humphrey when a guest is stabbed to death.

The unnecessary romance between Humphrey and Martha (who's not even in the second episode) gives the impression that its only purpose is to trigger a departure of the beloved DI. Or this storyline would be even more unnecessary, which is probably preferable as Kris Marshall leaving would be a big loss for the feel-good detective drama. This said, the bumbling but brilliant Columbo of the Caribbean has become a more conventional type of sleuth.

Talking about unnecessary, they seem to have found something to do for poor Catherine (Élizabeth Bourgine) beyond the cocktails: she wants to run for the Honoré Mayor's office. That's certainly why she's too busy to appear in episode 3. In Death in Paradise there is worse than "not necessary", apart from dead we mean, it's "invisible". Like the wife of Officer J.P. Hooper (the excellent Tobi Bakare). Why J.P. keeps asking advices about Rosey and him to Dwayne (Danny John-Jules, thankfully still on board) is the most interesting mystery of this sixth series.

After Natasha Little in the first episode, we can now add Ramon Tikaram to the list of the current series guest stars who have both Midsomer Murders and Death in Paradise (or vice versa) in their resume. But also Jason Hughes, Midsomer's DS Ben Jones himself. Thanks to the "Next Time" trailer at the end of the third episode, we learn that Commissioner Patterson (the great Don Warrington) hasn't been discretely kidnapped or murdered. Soon London will replace momentarily the gorgeous Guadeloupe scenery.

[Update - January 26] It crossed my mind when I noticed the name of the actor and his character in the cast list of the fifth episode... Could Ardal O'Hanlon, who plays DI Jack Mooney, be DI Goodman's replacement in case of a possible Kris Marshall departure while Humphrey is in London?
Publié par Thierry Attard à l'adresse 08:52