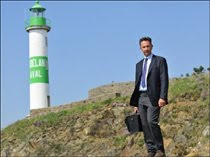 Filmed in Brittany for private network TF1, the French adaptation of ITV1's hit Doc Martin arrived yesterday with the first two episodes of a 6 x 52-minute series. Thierry Lhermitte (The Dinner Game) stars as Dr Martin Le Foll, a misanthropist surgeon from Lyon whose hemophobia forces him to become a GP in a Breton village called Port-Garrec.

Martin spent his childhood holidays there with his aunt Jeanne (Dominique Mac Avoy) but his total absence of social skills and bedside manner quickly become a problem with the local population. At first he doesn't get along with neither Julie Derville, the schooteacher (Natalia Dontcheva), nor with zany cop Mario Gratsky (Doudi). He inherits of Clementine Vincenti (Justine Bruneau de la Salle), an incompetent receptionist. His surgery is in total disarray but Bernard Groslay (Joël Lefrançois) and his son Romaric (Bruno Gouery), plumbers and handymen, will not be of any help.

Produced by Pascale Breugnot's Ego Productions, Doc Martin is adapted by scriptwriter Eric Kristy from ITV's dramedy Doc Martin starring Martin Clunes. "Doc Martin" originated in the 2000 comedy Saving Grace (written by Craig Ferguson and Mark Crowdy), as jolly marijuana smoker Dr Martin Bamford. Bamford was spun off into two "prequel" 2003 TV movies for Sky: Doc Martin and Doc Martin and the Legend of the Cloutie, where Martin was an obstetrician who left London for the village of Port Isaac in Cornwall after learning that his wife has been unfaithful to him with three of his best friends.

Martin Clunes's Buffalo Pictures had a deal with Sky for two television films per year. But when Sky Pictures folded Clunes took the concept to ITV, which asked for some changes in Martin's backstory and brought writer Dominic Minghella on the project. Dr Martin Bamford then became the less social Dr Martin Ellingham, a London surgeon whose career collapses when he develops a blood phobia. The grumpy Ellingham decides to become a GP in the picturesque Cornish village of Portwenn.

Launched in 2004 on ITV1, Doc Martin is a huge hit and its French adaptation is the third foreign version of the format sold by DRG (distributor of the original). Doktor Martin, starring Axel Milberg as Dr Martin Helling, ran in 2007 and 2009 on German pubcaster ZDF. In Spain the talented Gonzalo de Castro is Dr Mateo Sancristóbal in the excellent Doctor Mateo since 2009 (on Antena 3). French network TF1, which has some experience in rural dramedies (Père et Maire) airs Doc Martin in its successful primetime Monday night comedy slot.

Like its German and Spanish counterparts, the French adaptation sticks to the original storylines. Le Foll's first patient is Capitaine Delalande (Pierre-Marie Mosconi), who's embarassed by a pair of growing breasts like before him Colonel Spencer (played by Richard Johnson in Going Bodmin). There are some variations - Martin's car is a wreck with a mad sat nav, not a Lexus, some short cuts and advanced character situations but the tribulations of the iconic GP are astutely and funnily transposed, helped by great dialogues and the charm of the South Finistère locations (Clohars-Carnoët and the Port of Doëlan).

The Cornouaille française is the perfect match for the fictional town of Portwenn - but Collioure in the Pyrénées orientales was also considered (1) - and once the original show aptly adapted in the ideal setting it's the casting which makes the difference. Movie and stage actor Thierry Lhermitte nicely succeeds in giving Doc Martin a French cultural identity, surrounded by an aptly chosen supporting cast. With a very special mention for the irresistible David Strajmayster - aka Doudi (revealed by the shortcom Samantha Oups! ) - as head of the Municipal Police Mario.

8.9 million viewers watched the first episode and 8.2 million the second (2). The hotels and restaurants in the area of the locations will certainly adore the series and maybe somewhere, in an office, someone will consider the idea of morphing Stephen Fry's Peter Kingdom (ITV's Kingdom) into "Pierre Leroy". Oh, and a face off between the two Martins, Le Foll and Ellingham, would be pretty cool someday. Because after all Port-Garrec is twinned with Portwenn - like Doctor Mateo's San Martin del Sella in Spain.