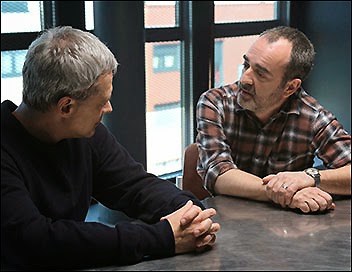 
Local Entrepreneur and mob boss Bazza Swaty (Emmanuel Salinger) finds the body of a young woman in his swimming pool. Commissaire divisionnaire Lucie Dardenne (Mata Gabin as the French answer to Law & Order's Lieutenant Van Buren) wants to bring him down once and for all. She forbids Winckler, Swaty's childhood pal, to take the case and gives it to Faraday. Assigned on a noise complaint, Winckler and Lieutenant Julie Fabian (Liza Manili) surprise a group of libertarian activists while they're trashing the house of a judge.

It turns out that the corpse at Bazza's place is Rachel Berger, an 18 year-old swimming champion. Both Paul's friendship with the mobster and his career in the police are at stake. Richard is at odds with Dardenne, who wants him to incriminate Bazza Swaty at any price. Lulu, Faraday's deaf-mute son (Jean-Marie Hall), happens to know one the activists.

Directed by Edwin Baily, Une si jolie mort is adapted from the book No Lovelier Death (2009) by Série Noire author and scriptwriter Elsa Marpeau. This episode is simply the best of Blood on the Docks so far. With Guillaume Viry (police computer expert Bill Gates), Julien Boulenguiez (Bazza's henchman Jimmy), Daniel Carraz (Michel), etc. Amongst the guest cast, note the performance of Mathieu Lourdel as the libertarian clown.

Blood on the Docks is distributed by Zodiak Rights. Next friday France 2 will air Chapelle ardente, written by Olivier Prieur.

In the 1950s, Commissaire Maigret, a laconic, pipe-smoking French policeman, uses his profound knowledge of human nature to solve crimes. Volume 1 of the TV series Maigret (1991-2005), with the great Bruno Cremer, is available since last month in France on DVD from Koba Films.

This set contains the first eight of the 54 feature-length installments from the definitive adaptation of the detective created by Belgian writer Georges Simenon (1903-1989).

Commissaire Jules Maigret appeared in 75 novels and 28 short stories published between 1931 and 1972. Popular worldwide, these stories have been adapted many times in various countries, mainly for the cinema (with Pierre Renoir, Albert Préjean, Jean Gabin, etc...) and television. From 1960 to 1963, Rupert Davies played "Inspector Maigret" in Maigret for the BBC. On French TV, Les enquêtes du commissaire Maigret, starring Jean Richard, ran from 1967 to 1990 with eighty-eight 90-minute episodes until pubcaster Antenne 2 decided to give its familiar figure the axe. Though with the intention to give him a fresh start (Richard was then 70) (1).

English producer Steve Hawes, an admirer of Simenon's work and a former head of drama at Granada Television (2), and French producers Eve Vercel and Robert Nador of Dune Production, joined their creative forces for the new Maigret of Antenne 2 (which became France 2 in 1992). To portray the commissaire, Vercel and Nador considered Julien Guiomar but he was busy with TF1. They had also in mind Philippe Noiret or Bernard Fresson. Movie, stage and TV actor Bruno Cremer accepted the iconic role after due reflection, for 12 episodes only.

To radically differ from the previous version, the producers decided to set theirs in the 1950s with a cinematic feel. Hence directors like José Pinheiro (Parole de flic), Claude Goretta, Bertrand Van Effenterre (Tumultes) or Serge Leroy (L'Indic) for the first batch of episodes. The budget required co-production with Swiss and Belgian televisions, French private channel La 5 and later EC Télévision Paris. But also filming in Switzerland, Belgium or Czech Republic (3). Laurent Petitgirard composed and conducted the magnificent theme of Maigret, and the superb music of most of the series.

- Maigret et les plaisirs de la nuit (1992, aired as the fourth episode). Directed by José Pinheiro, adapted from Maigret au Picratt's (Maigret in Monmartre) by Jacques Cortal and José Pinheiro. A stripper is found dead in the club where she worked. Jacqueline Danno (Rose) and Jean-Louis Foulquier (Fred) are amazing. Philippe Polet is excellent as Lapointe.

- Maigret et la Grande Perche (1991). Directed and adapted by Claude Goretta from Maigret et la grande perche (Maigret and the burglar's wife). An ex-prostitute tells Maigret her burglar husband vanished after finding a dead body in a house. This house belongs to a dentist who lives with his elderly mother. Brilliant, thanks to Renée Faure as Madame Serre and Michael Lonsdale as her son. Anne Bellec appears as Madame Maigret.

- Maigret chez les Flamands (1992). Directed and adapted by Serge Leroy from Chez les Flamands (The Flemish shop). Maigret goes to the Belgian border at the request of the Peeters family, accused of murdering a young woman. Anna is played by Alexandra Vandernoot (Highlander: The Series). Vincent Grass (Cassin) dubbed Bruno Cremer in the finale episode (Maigret et l'Étoile du nord, 2005) because of the actor's health issues. With Gérard Darier as Machère. Filmed in Belgium.

- Maigret et la maison du juge (1992). Directed by Bertrand Van Effenterre. Adapted by Santiago Amigorena and Bertrand Van Effenterre from La Maison du juge (Maigret in Exile). Assigned in Vendée, Maigret is confronted with a judge (portrayed by the legendary Michel Bouquet) who tried to get rid of a body. Now famous actress Karin Viard (Thérèse) and Bruno Wolkowitch (Albert) both played in the same 1989 episode of Jean Richard's Maigret.

- Maigret et le corps sans tête (1992). Directed and adapted by Serge Leroy from Maigret and the Headless Corpse. The dismembered body of a man is found in a canal. Maigret goes to a café not far and notices the attitude of its owner, Aline Calas. Leroy delivers an authentic "film for television". The performances of Aurore Clément (Aline) and Patrick Floersheim (Pape) are award-worthy. Philippe Polet and Gérard Darier return as Lapointe and Machère.

- Maigret et la nuit du carrefour (1992). Directed by Alain Tasma. Adapted by playwright Gildas Bourdet from La nuit du carrefour (Maigret at the crossroads). Maigret arrives at a crossroads in the country to solve the case of a corpse found in a car. Filmed in Luxembourg. Sunnyi Melles shines as Else, the "femme fatale". Roland Blanche, Myriam Boyer, and beloved Parisian character actor Hubert Deschamps are amongst the guest cast.

The eight episodes of this DVD set from Koba Films are on four discs. French subtitles for the hearing impaired are available.

(1) Jean Richard learnt about it in the press.
(2) Granada had its own Maigret, starring Michael Gambon, from 1992 to 1993.
(3) Even Finland, South Africa and Cuba for some later episodes. 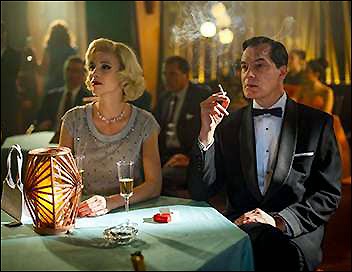 Le crime ne paie pas is adapted from the Hercule Poirot novel The Murder on the Links by scriptwriter Thierry Debroux, and directed by Marc Angelo. A waitress of L'Eden cabaret club sends a letter to Alice Avril at her newspaper before being murdered. But this time the reporter's unlikely partnership with Commissaire Laurence is in serious jeopardy when the obnoxious Commissaire Hubert Petipont, of the internal affairs, suspects him to be a corrupt cop.

Despaired by the situation of her beloved boss, Marlène must also endure the unsolicited attention of Hubert, who happens to be an expert on ladies' shoes and a goldfish lover. Avril is hired as a waitress at L'Eden, where she's sawed in half by the resident magician, and fulfills her dream to sing before an audience. Laurence has powerful enemies in Paris, an adventurous past and connections in the shadowy intelligence community.

Le crime ne paie pas is one of the best episodes of Les petits meurtres d'Agatha Christie, thanks to a brilliant script, great dialogues, excellent actors and the presence of the legendary Dominique Pinon as Hubert Petipont (who'd be perfect as Laurence's recurring nemesis). It's nice to see that Dominique Thomas, who plays Commissaire divisionnaire Tricard and reminds of the late Ronny Coutteure, has more screen time. François Godart plays Robert Jourdeuil, Alice's editor-in-chief.

Oxford-set British detective drama Lewis (Inspector Lewis in the US), a spin-off from Inspector Morse, was launched in 2006. Although it was assumed that Series 7 would be its last, ITV announced in February 2014 that DI Robbie Lewis (Kevin Whately) and DS James Hathaway (Laurence Fox) would return for an eighth series.

Series 8 premiered last week on American network PBS (Lewis is co-produced by ITV Studios and Masterpiece) and will start tomorrow night in the U.K.

The previous series of Lewis split the traditional feature-length episodes in two 60-minute instalments aired over two consecutive weeks. This inappropriate change in the momentum of each story (conveniently turning three episodes into six), added to a drop in quality, didn't hurt the ratings. Kevin Whately and Laurence Fox having expressed their desire to move on, the elegant last scene of Intelligent Design, the "finale" episode, saw Lewis and Hathaway enjoying a pint as the former retired and the latter left the force. PBS and French pubcaster France 3 stuck to the two-hour format.

Given all this, the commission of six new one-hour episodes (three films) looked rather surprising if not unnecessary, especially with the seventh series being such a letdown. But at least the return of Lewis and Hathaway in Entry Wounds, written by Helen Jenkins and directed by Nicholas Renton, was done properly thanks to everyone involved. Robbie lives with pathologist Laura Hobson (Clare Holman) and struggles to adapt to retirement when Chief Superintendent Innocent (Rebecca Front) uses a little trick in order to get his return on a contractual basis.

After an extended break from the Oxfordshire Police, James is now a Detective Inspector. He investigates his first murder case, a neurosurgeon shot in the head, with his partner DS Lizzie Maddox (the excellent Angela Griffin) when his ex-boss arrives. Far better than the whole previous series, Entry Wounds is a successful balance between a well-handled relaunch and a good story. Fans of Lewis won't be disappointed and let's hope the couple of other two-parters will keep them satisfied.

Ace Bhatti and Kara Tointon are amongst the guest stars. Lewis is exec produced by Michelle Buck and produced by Chris Burt. Rebecca Eaton is the executive producer for Masterpiece. The music, superb as usual, is composed and conducted by Barrington Pheloung. 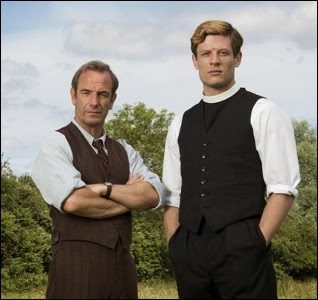