Email ThisBlogThis!Share to TwitterShare to FacebookShare to Pinterest
Libellés : ABC

THINGS TO WATCH IN HOLLYWOODLAND WHEN YOU'RE DEAD

US Networks Fall schedules already give a pretty neat idea of what will be the scale of the bodycount at the end of this 2008-2009 season.

THE HUNT FOR RED OCTOBER

Those who thought that previous season dug so low, WGA strike or not, will reach a Nirvana of oil with the chronicles of the shape of things to come on Nikki Finke's Deadline Hollywood Daily, starting with NBC (http://www.deadlinehollywooddaily.com/major-nbc-shakeup-ahead-network-wants-to-ax-teri-weinberg-hopes-ben-silverman-quits/). Home of the US version of The Office, the Peacock remakes an Australian sitcom Hit, Kath & Kim http://www.nbc.com/Kath_and_Kim/), due to arrive on October 9. « The art of adapting a programme from another country is a fraught with difficulty. For every hit: Ugly Betty, The Office, Queer as Folk, there is a miss along the lines of Chateau Snavely, the 1978 attempt to remake Fawlty Towers for an American audience, which was thankfully cancelled after the pilot », wrote Sarah Hughes on Viva Laughlin, the remake of BBC's Blackpool(http://www.guardian.co.uk/media/organgrinder/2007/oct/23/post53). What's next after ABC's remake of Life on Mars? An US remake of ITV's Lost in Austen? « Amanda Price hates her life, but she loves Gone in the Wind [Imagine the voice of the late Don LaFontaine] ... Lost in Mitchell, coming soon! »

Of NBC's October Coming Attractions, My Own Worst Enemy, with Christian Slater, is one of the most awaited. Watching the promos on the NBC Website (http://www.nbc.com/My_Own_Worst_Enemy/) leaves the impression of a Jekyll meets Jason Bourne but Christian Slater worths a look.

Other Networks seem to fare no better (http://www.deadlinehollywooddaily.com/double-trouble-inside-network-fall-skeds/) and, reading Deadline Hollywood Daily, ABC's Dirty Sexy Money looks neither « dirty » nor « sexy ». Anyway is Money sexy these days? After the Hell of a week in Wall Street, Nikki evaluates the impact of the Bloody Monday on the Entertainment Industry (http://www.deadlinehollywooddaily.com/yes-bloody-monday-will-affect-hollywood/). Note some wonderful pieces of Finkisms, like « And I hope there's a special hell reserved for "naked" short-sellers, and eventually a perp walk » or « They weren't ignoring Sarbanes-Oxley by lying, were they? »

The lucid, wise and corrosive Furious D, reacts on the views of Ben Silverman, co-chairman of NBC Entertainment and NBC Universal Television Studio, about the advantages of co-productions like the Network's Crusoe (http://dknowsall.blogspot.com/2008/09/hollywood-babble-on-on-166-nbc-world.html): « One of the facets of this cubic zirconium of managerial brilliance is the use of international co-production to supposedly make NBC shows "bomb-proof," by making them profitable, even if they don't attract many viewers ».

« Lost in a Roman Wilderness of Pain » sung the Bard... When your humble servant was a kid we were mesmerized by a clip shown on Le club des télévisions du monde (Televisions of the World Club, a summer show on French TV) and called Come on along with ABC, one of the most brilliant ad campaign ever for a US TV network. US Networks made the world dream then, US television made top-notch Entertainment for US audiences with US standards and sold it to the planet. What networks need most now is the Glen A. Larson, Stephen J. Cannell, Quinn Martin, Aaron Spelling, Harve Bennett, Doug Cramer, Kenneth Johnson or Lee Goldberg of the next 20 years. Plus new Fred Silverman and Brandon Tartikoff. Maybe US Networks should awake or leave Television fiction to Showtime or HBO. After all, Deal or no Deal is well done and fun to watch.

A propos of HBO, Nikki Finke expressed her disapproval of the early renewal of True Blood (started on September 7) for a season 2 (http://www.deadlinehollywooddaily.com/hbo-quickly-renews-true-blood/), qualifying the series of « nothing more than a contemporary version of Interview With The Vampire ». « And its pisspoor writing demonstrates that either Oscar and Emmy winner Alan Ball (American Beauty and Six Feet Under) is phoning it in or else he's got a talent-less nephew with the same name » (ouch!) Think about it, vampires are nothing new on TV but the move is rather smart for HBO, back to basics of The Hitchhiker after the Sopranos era. The original Hitchhiker series (not the USA-La Cinq No Sex-No gore Europudding sequel) - not precisely Shakespeare - contributed to put the cable channel on the map in the Eighties. Creative dynamic is clearly with Showtime but maybe it's too soon to bury HBO.

And a remake of The Hitchhiker would be a great idea, by the way...
Publié par Thierry Attard à l'adresse 19:43 No comments:

ALFRED IN THE MIDDLE (EPISODE 1) 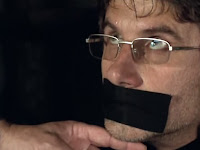 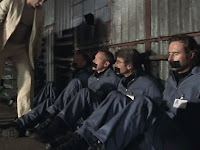 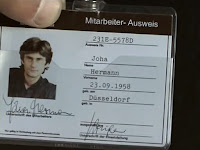 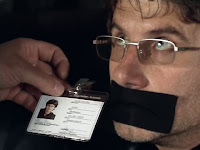 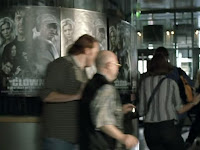 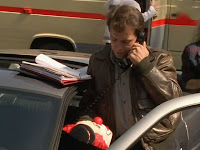 For you, dear visitors, a new series called Alfred in the Middle. A salute to elegant or funny (or both) cameos or references in movies or television series.

Let's begin with our German friends of action concept and this episode of their mega-cult series (if not an institution) Alarm für Cobra 11 - Die Autobahn Polizeï (Alarm for Cobra 11). In the first episode of season 17 (Comeback, 2005), the villain neutralizes three employees of a maintenance company in order to switch places with him and his henchmen.

And the name of the employee in the middle is Hermann Joha, played by... Hermann Joha, stunt artist, professional pilot, producer, director, writer and boss of action concept (http://tattard2.blogspot.com/2008/06/hermann-joha.html) - company which as invented an action style so innovative and popular that it's even frequently ripped off by Hollywood blockbusters.

Mr Joha is the creative and producing force behind the show and behind the hit series Der Clown and its high octane feature film spin-off (http://tattard2.blogspot.com/2008/05/clown.html). Interestingly, the director of this episode of Cobra is the excellent Sebastian Vigg, director of the Clown movie.

In a sequence of Comeback, Semir and Tom (Erdogan Atalay and René Steinke) must defuse a bomb in a movie theater playing the feature version of The Clown. But the oldest fans of action concept certainly remember that Semir made a cameo in the Clown tv movie of 1996. You can see him holding the clown mask of Max Zander in our last photo. Was it in an alternate reality?

Edit: The always professional and nice Petra Keller, of action concept, informs us that the two others employees with theirs mouths taped are, on the left: Roland Busch, one of ac's "Taurus World Stunt Award" winners and action director and, on the right: Stefan Retzbach, the producer of Cobra 11. Shall we understand that the staff of action concept moonlights as maintenance employees? Thanks, Petra.

Just read the sad news on Nikki Finke's Deadline Hollywood Daily (http://www.deadlinehollywooddaily.com/rip-don-lafontaine/) and it's a personal shock for your humble host: Don LaFontaine, nicknamed « The voice of God », the great voice-over artist behind 5000 movie trailers, has died.

Three years ago he made me the honor to accept an interview (http://tattard2.blogspot.com/2008/05/don-lafontaine.html). He was a gentleman, a man with class, and the inventor of the modern trailer.

« When you die, the voice you hear in Heaven is not Don's. It's God trying to sound like Don. » (Ashton Smith)