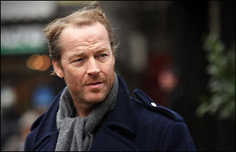 Irish crime drama Jack Taylor, based on Ken Bruen's books, originated on TV3 in 2010. The Guards, its pilot TV movie, made its UK debut last thursday on Channel 5 where it will be followed by two other 90-minute standalone stories: The Pikemen and The Magdalen Martyrs.

Scottish actor Iain Glen (Game of Thrones, Prisoners' wives) stars as Jack Taylor, a disgraced ex-sergeant ejected from the Guards - the Irish police (An Garda Síochána) - for punching a government minister and drinking. Now he makes a living as a "finder" of people and things in Galway, on the west coast of Ireland. « There are no private eyes in Ireland. Too close to being an informer – a dodgy concept. » But he stubbornly won't give back his regulation garda all-weather coat because "once a guard, always a guard". Though  Superintendent Clancy (Frank O'Sullivan), his former partner, may disagree.

Jack's "office" is at the pub of his surrogate father and barman Sean (Barry Cassin). While a fourth dead girl has been discovered near the river, Anne Hennessey (Tara Breatnach) manages to locate Taylor and hires him to find her missing daughter. He asks around, including Father Malachy (Paraic Breathnach), and his search leads him to a factory illegally employing young women. Jack can only rely on Garda Kate Noonan (Nora-Jane Noone) and on former paratrooper Sutton (Ralph Brown), his drinking buddy who's now a painter. Things get nasty as a prominent local figure is involved: businessman and art collector Trevor Lanpert (David Heap).

Adapted from the first Jack Taylor novel (2001), The Guards is directed by Stuart Orme (Colditz, The Puppet Masters) and written by Tom Collins, Anne McCabe and German producer Ralph Christians. Christians's Galway based prodco Magma Productions is behind the Jack Taylor series. The pilot, filmed in Galway, is exec produced by Ralph Christians, Dirk Schweitzer & Richard Price and produced by Clodagh Freeman. It is a co-production with German private channel RTL and Richard Price Television Associates. The subsequent TV movies (1) are co-produced by  Molten Rock Media Production and ZDF Enterprises - the distribution arm of German pubcaster ZDF and distributor of Jack Taylor.

The plot itself is not original but The Guards successfully brings the hard-boiled genre to Galway, where author Ken Bruen was born and lives. Iain Glen is fabulous as the disheveled, straight-shooting and hard-drinking finder with cheap rates and a big heart. The talented actor said he always wanted to play a private eye (2) and in Jack Taylor it definitely shows. The Guards is a gripping crime thriller which will remind of German Krimi-Serie Schimanski (with Götz George) to some continental European viewers.

The first series of Monroe, the ITV drama starring James Nesbitt (Occupation, Jekyll) in the title role, arrives this thursday on Arte. The Franco-German channel airs three episodes (!) tonight and the remaining three next week.

Gabriel Monroe is a genius neurosurgeon, a falsely arrogant virtuoso whose flamboyance hides a true interest for his patients but also pains from the past. He's brilliant and witty but has no idea that his family life is a mess. And his wife is going to give him a crash course.

Writer Peter Bowker (Occupation, Wuthering Heights, Blackpool), certainly didn't do a favour to Monroe when he told that he hoped his creation would achieve a similar dramatic intensity to that found in the American drama House (1). Gabriel has a Wilson too but it's a trainee (Michelle Asante) with a propension to fainting, and his bedside manners are better than those of the Princeton-Plainsboro maverick doc. In fact this unconventional master of neurosurgery is more Jeffrey Geiger (Mandy Patinkin in Chicago Hope) than House and James Nesbitt is at his best - he needed it after the bonekickeresque The Deep.

Sarah Parish (Mistresses) plays cardiac surgeon Jenny Bremner and Tom Riley (Lost in Austen) is anaesthetist Lawrence Shepherd. Monroe is produced by Mammoth Screen and exec produced by Peter Bowker, Michele Buck and Damien Timmer. The pleasant intro theme and the music are by Dominik Scherrer (Primeval) and the title sequence (2) is from Momoco (Injustice, Zen, Luther, Strike Back). The first three episodes of this first series are directed by Paul McGuigan (Sherlock) and episodes four, five and six are directed by David Moore (Merlin, The Forsyte Saga).

Monroe has its defects, like the annoying visual effects and the clichéed use of songs, but this enjoyable drama worths more than the comparisons with House. Too bad it lasted only two series.

We reviewed the premiere of Monroe when ITV1 aired it in 2011:

MR SELFRIDGE GETS A SECOND SERIES

In the middle of its 10-episode run, Mr Selfridge is commissioned by ITV for a second series following its more than deserved rating success.

Regrettably it is not even close to the shadow of Horowitz's drama masterpiece Collision (2009). But actor Charlie Creed-Miles is very impressive as the cynical copper and the title sequence has the distinctive and classy style of Momoco (Luther). Injustice is to be remade stateside by Dick Wolf. He shouldn't rush...

We reviewed Injustice when ITV (then ITV1) aired it in 2011:

TF1 knows how to keep the "stars" busy. Last fall, the French private channel made them dance in Danse avec les stars, the local Strictly Come Dancing/Dancing with the Stars. On friday TF1 will make them dive in Splash: le grand plongeon, a French adaptation of Dutch format Sterren Springen, where celebs try to master the art of diving.

Rival commercial channel M6 had a similar programme (adapted from Stars In Danger: The High Dive) in its pipeline but gave up as TF1 shot first. The interest of both channels is understandable as the Brit Splash recently triumphed on ITV. Splash: le grand plongeon will last three weeks.

Are aboard too dancer and actor Golan Yosef, from the musical Dracula, l'amour plus fort que la mort. Actress Jennifer Lauret, one of the most familiar faces of TF1 (comedy Camping Paradis, long running comedy/drama Une famille formidable and as long-running cop drama Julie Lescaut). Danièle Evenou, stage and TV actress. Presenter and actor Jean-Pascal Lacoste (the crime drama Section de recherches), brought to the attention of French public by  the first series of the local  Fame Academy.

There's also Miss France 2011 Laury Thilleman, Danse avec les stars dance pro Katrina Patchett, Nadège from the French Big Brother and... Gégé (no kidding), from the French Survivor - nicknamed "The Adventurer". Hosts are Estelle Denis - recently transferred from M6, Julie Taton and Gerard Vives. Vives is an actor who got fame with in the 1990s as gym gay employee Gérard in French sitcom Les Filles d'à côté and its sequels (all from the same producer as the Hélène et les garçons franchise). He was also a contestant of Danse avec les stars 3 and the sidekick of host Vincent Lagaf' in the French The Price is right.

Were added this week to the list of contestants, singer Keen'V and presenter/journalist Christophe Beaugrand. Judges will be confirmed tomorrow.

[Update February 7, 2013] Patrick Puydebat, wounded, will not be among the contestants. 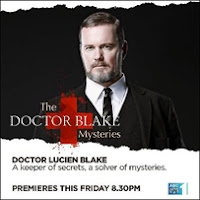 Australians do top-notch dramas. Ask US network Fox, who wants to remake Rake. The first series of Miss Fisher's Murder Mysteries attracted a lot of attention and was bought by French pubcaster France 3 for its "Sunday Sleuth Slot".

Both shows are aired in Australia on ABC1 and the channel's latest effort, The Doctor Blake Mysteries, premiered this week.

This new 10 X 60-minute detective drama stars Craig McLachlan (best known here for his role in Bugs) as Dr Lucien Blake, who returns home to Ballarat in 1959 after a long absence to take over his deceased father's general medical practice. As the local police surgeon Lucien sometimes investigates mysterious deaths, but he is a man of mystery and secrets himself. Actually Blake hides his own pains behind a dose of anticonformism - but not only.

« You really don't need to hide all of these, you know.
- There aren't many consolations in life, Jean. Good whisky happens to be one of the few.
- There's rather a lot of consolation here. »

Other regulars of The Doctor Blake Mysteries are Nadine Garner (City Homicide) as Jean Beazley, Lucien's housekeeper and receptionist. Rick Donald (Underbelly) as young copper Constable Daniel Parks, Jean's nephew. Joel Tobeck (This Is Not My Life) as Chief Superintendent Matthew Lawson. And Cate Wolfe as Mattie O'Brien, the district nurse and a lodger at Dr Blake's house. In the opener, a girl from the local reform school is hit by a car and found later in the lake. Lucien Blake wants to know what really happened, and even swallows illicit pills to determine if they're amphetamines in order to prove his intuitions. What some eminent members of the Ballarat community find as hard to swallow is Lucien's tastes in art.

The Doctor Blake Mysteries is a creation of George Adams and Tony Wright (Mrs Biggs). It is produced by December Media and The Australian Broadcasting Corporation, in association with ITV Studios Global Entertainment (also worldwide distributor) and Film Victoria Australia. George Adams produces, Tony Wright exec produces with Carole Sklan and Christopher Gist. The magnificent music is by Dale Cornelius and the superb title sequence is by The Kingdom of Ludd.

Written by Stuart Page (Neighbours) and directed by Andrew Prowse (Rush), Still Waters is a quite enjoyable premiere. Craig McLachlan is great and the cast is excellent. The Doctor Blake Mysteries is filmed on location in Ballarat. Splendid work from everyone involved.