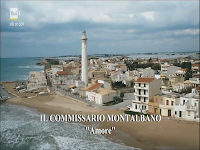 Amore was adapted by Francesco Bruni, Andrea Camilleri, Salvatore De Mola and Leonardo Marini with Valentina Alferj, from Andrea Camilleri's short stories Amore (in the collection Un mese con Montalbano) and La prova generale (in the collection Gli arancini di Montalbano). Salvo Montalbano dreams that he marries Livia Burlando but things don't turn out as planned. Pasquale, the son of his housekeeper Adelina, tells the commissario that he witnessed a strange scene between an elderly couple in the building where he lives. Salvo goes to their flat and sees the same scene but in reverse order.

Later, Montalbano, his deputy Mimi Augello (Cesare Bocci) and Inspector Giuseppe Fazio (Peppino Mazzotta) must find out what happened to a young woman named Michela Prestia. On a personal level, Salvo feels jealous about Livia. He confides in Mimi and gives Catarella (Angelo Russo, at his very best) a very special and most secret assignment. But the loyal agent does the job too well and doesn't reappear at the police station. Directed by Montalbano regular helmer Alberto Sironi, the absolutely superb Amore is the 32nd episode of Il commissario Montalbano.

Inspector Montalbano is produced by Palomar and RAI Fiction. Produced by Carlo Degli Esposti, founder and president of Palomar, and Nora Barbieri with Max Gusberti. Marco Camilli is the producer for Palomar and Erica Pellegrini produces for RAI. Gianfranco Barbagallo exec produces. Music composed and conducted by Franco Piersanti. Songs by Olivia Sellerio. Cinematography by Franco Lecca. Distributed by Rai Com. Il commissario Montalbano is aired in the UK by BBC Four as Inspector Montalbano and in France on France 3 as Commissaire Montalbano.

Actor and singer Tom Beck (Alarm für Cobra 11 - Die Autobahn Polizeï) stars as Felix Winterberg, the great-great grandson of Albert Einstein and a scientific genius himself. Felix has Huntington's disease (like his father) and he works reluctantly for the Bochum police as a consultant.

The bottom line: Rather The Tom Beck Show than Elementary.

Felix Winterberg interrupts his lecture because of a student who is watching a live broadcast of internet star Nana's video channel on her smartphone. Nana is about to present a very special object... which kills her in a spectacular explosion. The police quickly calls Winterberg, who joins Elena Lange (Annika Ernst) and forensic specialist Kirsten Maybach (Haley Louise Jones) on the crime scene. The victim's biggest fan Rosa Marcial (Vita Tepel) and Nana's boyfriend Crazy Alex (Phil Laude), another internet celebrity, are in shock.

La giostra degli scambi was adapted by Francesco Bruni, Andrea Camilleri, Salvatore De Mola and Leonardo Marini with Valentina Alferj, from the namesake novel first published in 2015 by Sellerio (Palermo). It's a weird day for Salvo Montalbano, who's almost arrested by the carabinieri while trying to separate two men in a brawl on the beach in front of his house. Then, he receives a phone call from his housekeeper Adelina. She knocked out a man named Alfredo Virduzzo with a frying pan because she mistook him for a thief.

Cinematography by Franco Lecca. Distributed by Rai Com. Il commissario Montalbano is aired in the UK by BBC Four as Inspector Montalbano and in France on France 3 as Commissaire Montalbano. Directed (with perfection) by Montalbano regular helmer Alberto Sironi. Montalbano is more than an institution in Italy and each episode is an event. Angelo Russo, who plays the improbable Catarella, even appeared in Soliti Ignoti – Il Ritorno, a game show adapted from a format called Identity and which preceded the transmission of La giostra degli scambi. The episode reached an historic high with 11.386.000 viewers (45.1%).

THE HALCYON ON FRANCE 3

[Favourite of the Month] Aired between January and February 2017 on ITV, The Halcyon is a 8 x 60-minute lavish drama created by Charlotte Jones.

Set in a five star London hotel in 1940, The Halcyon arrives in France this thursday on pubcaster France 3 as The Halcyon: Un palace dans la tourmente.

The bottom line: Mr Selfridge and Downton Abbey meet Hotel Babylon, with a bit of Foyle's War and Grand Hotel.

Produced by Left Bank Pictures (The Crown), The Halcyon is an attempt by ITV to recapture the flame of their period drama megahit Downton Abbey. This drama will not illustrate the definition of "Originality" in a dictionary but it's gripping, well-acted and thoroughly produced. The Halcyon shouts class at all levels right from the pre-credit party of the premiere (which literally starts with a bang). Then cue to a Bondian title sequence with an uber cool song, between Portishead and 007. The amazing Steven Mackintosh and the fabulous Olivia Williams lead a competent ensemble cast in a world of glamour, intrigue and romance. Mackintosh plays Richard Garland, the subtle and effective hotel manager (a man with some secrets). Williams plays Lady Priscilla Hamilton, the intelligent, heartbroken wife of the Halcyon owner, soon confronted to a life-changing situation.

Filmed in spring/summer 2016 and aired by Belgian television in december of the same year, French crime drama Prof T. (6 x 52-minute) will cease to gather dust on the shelves of private channel TF1 on February 8.

Mathieu Bisson stars as Julien Tardieu, an asocial and phobic criminology professor who assists the Nantes police judiciaire as a consultant.

Produced by Vema Production with TF1, Stromboli Pictures, RTBF (Télévision belge) and RTS Radio Télévision Suisse, Prof T. is actually based on Professor T., a Flemish series created by Paul Piedfort (Aspe) and launched in 2015 on Belgian channel Eén. The talented Koen De Bouw (Salamander, The Memory of a Killer) stars as Jasper Teerlinck, a brilliant but dysfunctional  professor in criminal psychology at the University of Antwerp. Human relationships are a challenge for the acerbic lecturer, who fears dirt (similarly to Monk) and proximity with people. Jasper despairs faculty secretary Ingrid Sneyers (Goele Derick) by never fulfilling his administrative duties. Only Walter De Paepe (Carry Goosens), dean of the university, considers his eccentricity with benevolence.

Police Inspector Annelies Donckers (Ella Leyers), an ex-student of Jasper Teerlinck, investigates the rape of a female student on the Campus Drie Eiken with her colleague Inspector Daan De Winter (Bart Hollanders). When they hit a brick wall, Annelies tries to convince Teerlinck to assist them. Chief Inspector Paul Rabet (Herwig Ilegems), who has personal issues, doesn't take it well. Christina Flamant (Tania Oostvogels), head of the detectives, already knows Jasper. Following the arrest of the campus rapist, Professor T. is hired by Christina as an advisor. His rich mother, Adelinde Van Marcke (Viviane De Muynck), is not enthusiastic. Maybe it has something to do with her son's frequent hallucinations?

Professor T. (two 13 x one-hour seasons) quickly goes beyond the "flawed sleuth" tropes of its premise to find its style with a certain melancholy and a bit of humour. The strong characterization is served by a great cast. The soundtrack is amazing, with a superb original music composed by Gregory Caron & Hannes De Maeyer and cool standards sung by Luigi Tenco or Will Ferdy (amongst others). Professor T. is produced by Skyline Entertainment (Salamander, Aspe) and distributed by Beta Film, which sells the format too. Novelist and scriptwriter Elsa Marpeau (France 3's megahit Capitaine Marleau) is behind the French adaptation, Prof T., set in Nantes with Mathieu Bisson as Pr. Julien Tardieu.


The Gaulic Professor T. is surrounded by Lieutenant Lise Doumère (Fleur Geffrier) and Lieutenant Dan Levasseur (Amir El Kacem). Christina Flamand (with a "D") and Paul Rabet are now played by Zoé Félix and Pierre Berriau. The excellent Mariamne Merlo plays Astrid Lestringent, the French Mrs Sneyers. The legendary character actor Jean Benguigui is Valéry D'Ormont, the local counterpart of De Paepe. Past the inevitable changes, Prof T. obliterates all the subtlety of its Flemish model right through the second episode with some (unnecessary) new material and an insistence on comedy. On the plus side, Mathieu Bisson convincingly composes his own version of the main character.

TF1 seemed very confident when they commissioned a full season of Prof T. instead of their common 2 x 52-minute pilot formula. Belgian channel La Une aired the series in december 2016 but it will surface in France only next week. Directed by Nicolas Cuche and Jean-Christophe Delpias, Prof T. is produced by Véronique Marchat. Original music composed by Christophe La Pinta. Cinematography by Christian Abomnes. Filmed with the support of Région des Pays de la Loire. There's also a German adaptation called Professor T., produced by Rowboat Film- und Fernsehproduktion GmbH for ZDF and starring Matthias Matschke as Professor Jasper Thalheim. If you don't already know the original please try to have a look at Professor T., a gem which makes you want to visit Antwerp and even learn Flemish.