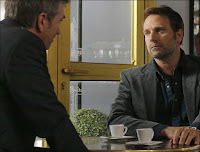 France 3's detective drama Crimes parfaits is a 6 x 52-minute "semi-anthology" where a murderer known from the start thinks he/she has committed the perfect crime but a detective (different in every couple of episodes) proves him/her wrong.

It's the concept of the inverted detective story, popularized by Columbo though created in literature many years before the famous lieutenant. The first season of this collection launched in December 2017 concludes with Episodes 5 and 6. Not yet aired by the channel, both are written by Céline Guyot  & Martin Guyot (Mongeville et Magellan: Un amour de jeunesse) and directed by Lionel Chatton.

Haute tension is the second case of Damien Roche and it's undeniably the best. Building contractor Fabien Magrini went to prison because of the malpractices committed by architect Laurent Lombard. He gets revenge by killing Laurent with a small lamp and a remote-controlled miniature robot while his victim is in a spa. Lombard regularly "borrowed" a client's house under construction for some intimate meetings with his mistress Carole. Commissaire divisionnaire Roche "cherche la femme" before focusing on Fabien. He quickly finds the man rather sympathetic. Once again brilliant, Philippe Caroit faces the excellent Thomas Jouannet as the murderer in a confrontation which reminds of Columbo. Also with Xavier Lemaître (Laurent Lombard), Jérémie Covillault (Luc), Flavie Péan (Carole), Martine Fontaine (Evelyne), etc.

The banters between Damien and Gabrielle feel more natural than in the previous episode. The scene where Roche searches for the robot is very funny. Commissaire divisionnaire Damien Roche definitely deserves his own series. Produced by Episode Productions (JLA Groupe) with France Télévisions. Co-produced by BE-Films and RTBF (Télévision belge) with the participation of RTS Radio Télévision Suisse, TV5Monde and 13ème Rue (NBCUniversal). Bernard Paccalet exec produces. Produced by Richard Berkowitz. Laurent Paul is the production manager. Music composed and conducted by Frédéric Porte. Cinematography by Maurizio Tiella. Theme music of Crimes parfaits by Jean-Pierre Taïeb. Filmed in Marseille, Martigues and St Chamas between November and December 2017.
[Update - October 2, 2020] Crimes parfaits will be available at the end of this month in the United States on the SVOD service MHZ Choice as Perfect Murders.
https://tattard2.blogspot.fr/2018/01/crimes-parfaits-episodes-3-4-france-3.html
https://tattard2.blogspot.fr/2017/12/crimes-parfaits-episodes-1-2-france-3.html
Publié par Thierry Attard à l'adresse 10:12 No comments:

Following a first crossover in 2016, Mongeville and Commissaire Magellan, two of the star sleuths of French pubcaster France 3, teamed up again for a case aired on Saturday, May 5.

The crossover used to be a "rare bird" in the History of French television fiction: the sitcoms produced for TF1 by AB Productions in the 1990s, an encounter between crime drama PJ (1997-2009) and legal drama Avocats et Associés (1998-2010) on France 2 in 2007 and then nothing until 2016 with Magellan et Mongeville. Created by Laurent Mondy, Commissaire Magellan started on France 3 in 2009. Produced by JLA Productions and set in the fictional town of Saignac (in the north of France), it stars Jacques Spiesser as Commissaire Simon Magellan. Launched in 2013, Mongeville is a production from Son & Lumière created by Jacques Santamaria and starring Francis Perrin as Antoine Mongeville. Mongeville is a retired juge d'instruction who regularly assists police captain Valentine Duteil (Gaëlle Bona) in Bordeaux.

Mongeville and Magellan bump into Delphine's daughter Sara. Both Simon and Antoine loved Delphine with passion when they were law students and they want to prove her innocence to the Lestrade-esque Commissaire Briare. Capitaine Duteil is on holidays, so only Lieutenant Stéphane can help them. An unknown Modigliani, Bartolini (not Balotelli) and secret love stories are some of the ingredients of this new reunion of "Les deux M". Astutely built around the character of Delphine, mentioned in the first crossover, the script is classic and sometimes predictable. Nevertheless, it does the job by giving the duo an excellent material valued by the chemistry between Francis Perrin and Jacques Spiesser (1). Filmed between November and December 2017 in Bordeaux and its region, Mongeville et Magellan: Un amour de jeunesse is punctuated with the mandatory "office du tourisme" drone shots.

Frédéric Sobczak is the production manager for Son & Lumière. Music composed by Philippe Kelly. Cinematography by Philippe Pavans de Ceccatty. Editing by Hughes Orduna. Mongeville et Magellan: Un amour de jeunesse attracted 4.195.000 viewers (20.6%) and ranked #2 vs The Voice on TF1. The success of the first crossover between Commissaire Magellan and Mongeville in 2016 inspired TF1 to commission the crossover between its long-running comedy/drama Joséphine, ange gardien (launched in 1997) and the comedy hit Camping Paradis (aired since 2006) (2). A repeat of Magellan et Mongeville on Saturday, May 12 was watched by 3.666.000 viewers (16.2%).

Amandine Attard contributed to this review.