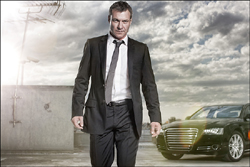 This week German private channel RTL world premiered Transporter: The Series, based on the popular Transporter movie franchise created by Luc Besson and Robert Mark Kamen. The 12-episode series was filmed in Europe and Canada (in Toronto) for an estimated $43 million budget.

English actor Chris Vance (Prison Break) stars as ex-elite commando Frank Martin, played by Jason Statham in the films. Frank is a professional freelance courier who drives a powerful black Audi and delivers mysterious packages against all odds for shady and dangerous clients. His rules: 1° Never change the deal. 2° No names. 3° Never open the package. In order to do the job with minimal personal interaction, he relies on his trusted handler, Carla (Hungarian actress Andrea Osvárt), who organizes his missions. Paris-born François Berléand reprises his character of Inspector Tarconi from the films and German actor Charly Hübner (The lives of others) plays Dieter, Frank's mechanic.

Helmed by Canadian director Stephen Williams (Lost), the pilot introduces the television Transporter with a cinematic and spectacular pre-credit sequence in the streets of Marseille and in a parking garage, where the aptly cast Vance sets the tone for his Frank Martin by giving a welcome James Bond feel to the role. Frank's first TV mission takes him to Berlin - thanks to international co-production - where he must drive Delia Weigert (Rachel Skarsten) safe to her father, a general and business advisor. The transporter crosses path with the henchmen of a ruthless local mob boss played in minimalist mode by renowned German actor Uwe Ochsenknecht.

« I don't know how to make TV shows -- I let the people who know how to do it take it on and hope they're doing their job, » said Luc Besson to The Hollywood Reporter last year. His Nikita was adapted for television twice, in 1997 and 2010, and now the Transporter movie franchise is rather smartly transposed as a series format. The car stunts (coordinated by Michel Julienne) and well-crafted martial art fights, choreographed by Cyril Raffaelli, are fitted into a standard script written by Alexander Ruemelin and Joseph Mallozzi & Paul Mullie (the Stargate TV franchise).

Without those mandatory ingredients from the films the story sounds like a recycled Largo Winch TV series episode and the talent of François Berléand is regrettably underused in this opener. The effective music is by French composer Nathaniel Méchaly (the two Taken, Colombiana). Overall this premiere is very watchable in its category (1) but can Transporter: The Series deliver such a package every week?

(1) RTL airs Transporter: The Series each thursday in the time slot devoted to the stunt antics of the Alarm für Cobra 11 - Die Autobahnpolizeï cops.

From Kudos Film & Television (Spooks) and American television writer and producer Frank Spotnitz (Strike Back, The X-Files) comes Hunted, which started this thursday on BBC One. The eight-part new espionage/thriller drama is a co-production of Kudos and Spotnitz's Big Light Productions for the BBC and HBO's sibling pay-cable channel Cinemax .

Australian actress Melissa George (The Slap) stars as Sam Hunter, an operative for a private intelligence company called Byzantium (Byzantium!) Left dead after a mission in Morocco sher returns to her employer in London one year later and ask her job back, without knowing who ordered to kill her and who to trust. Particularly as she suspects her lover and colleague Aidan Marsh (Adam Rayner). Her new assignment is to infiltrate the house of a mobster turned property businessman who is currently bidding to acquire a Pakistani billion-pound hydroelectric facility. But a terrifying blank faced assassin is after Sam.

One year after the final series of Spooks arrives the latest foray of Kudos and BBC One into the world of espionage. For Hunted the indie joins forces with X-Files veteran Frank Spotnitz, the man who morphed Chris Ryan's Strike Back into that brilliant action/adventure buddy movie of the week called Strike Back: Project Dawn for Sky and Cinemax. This Anglo-American co-production is filmed in Morocco, Scotland and London on a budget looking comfortable. Reliable talents like Adewale Akinnuoye-Agbaje (Lost), Stephen Dillane (Game of Thrones), Stephen Campbell Moore (Titanic) or Patrick Malahide are amongst the cast.

Except that Hunted is neither Spooks nor even Strike Back: Project Dawn. It's a second-hand Alias (in which Melissa George played Lauren Reed) or La Femme Nikita or any recent U.S. entry in the thriller/spy  genre. The dialogues are terrible and the story has enough cliches to inspire a dozen spoofs to Charlie Brooker. Maybe the one who wanted Sam Hunter dead is a lover of good dramas. Spooks concluded its nine-year run after a couple of unsatisfactory series, Hunted is in advance. Cinemax will premiere the show on Friday, October 19.

Last week American network CBS premiered Elementary, its modern take on Sherlock Holmes starring Jonny Lee Miller as Holmes and Lucy Liu as Dr. Joan Watson. The show was of course widely commented ever since the announcement of the project because of Sherlock, the acclaimed BBC version of Sir Arthur Conan Doyle's stories by Doctor Who showrunner Steven Moffat and Mark Gatiss.

Moffat's reaction was widely commented too (1). And the comparison between Elementary and the Benedict Cumberbatch starrer was inevitable given the worldwide prestige of Sherlock. But U.S. networks have an old relationship with Sherlock Holmes and Dr. John Watson through a consequent number of pilots and TV movies, or Holmes influenced shows like House and CBS's own The Mentalist.

In the past the Eye network even tried to launch a modern Sherlock Holmes series with a couple of unsold pilots: in 1987 Michael Pennington played Holmes and Margaret Colin was Dr. Jane Watson in The Return of Sherlock Holmes. In 1993, Anthony Higgins was a very doctorwhoesque Sherlock Holmes alongside Debrah Farentino as Dr. Amy Winslow in Sherlock Holmes returns, written and directed by the great Kenneth Johnson (V, The Incredible Hulk, The Bionic Woman). For the record, CBS also adapted several Agatha Christie's Hercule Poirot and Miss Marple books and one of the biggest drama hits of its history, Murder, She Wrote (1984-1996) owes a lot to Marple.

Written by Robert Doherty (Medium) and directed by Michael Cuesta (Homeland, Dexter), the pilot of Elementary takes the 221B Baker Street sleuth to New York. Former consultant for Scotland Yard, Holmes is also a former addict and his rich father has hired a sober companion to watch over him during six weeks. This "addict sitter" is Dr. Joan Watson, an ex-surgeon who lost a patient because of a mistake. She's left no time to be confused by their first meeting as Holmes, who now consults for the NYPD, brings her to a crime scene where he must assist Captain Tobias Gregson (Aidan Quinn).

Retrospectively Team Sherlock didn't need to worry because the only thing the Eye got from them is a good amount of free publicity. Devoid of the gimmicks and mannerisms of the British series, the Elementary pilot is 45 pleasant minutes of an old school CBS procedural/crime mystery served by a competent cast. English actor Jonny Lee Miller does a decent job obtaining his rather likeable Sherlock a membership to the club of the eccentric and irreverent U.S. television detectives. Lucy Liu is an interesting Watson and the new pair works fine.

The total lack of pretension and originality of Elementary is certainly its main asset but this entertaining modern update of Sherlock Holmes shows some unexpected potential for more "sherlock holmesisms" than two names. We'd like to have further details about that woman in Holmes's past (THE woman?) and about Sherlock's dad. Nobody can pretend he is the only consulting detective in the world, it's just elementary.