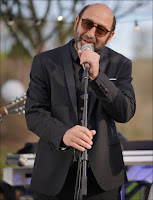 The bottom line: Two for the show.

Quelques maux d'amour is the 17th episode of Capitaine Marleau, the ratings juggernaut produced and helmed by Josée Dayan for France 3. In spite of some automatisms, a handful of labored or recycled jokes, a ridiculous set (the gendarmerie) and many postcard shots, it brings back the crime drama to an acceptable shape after the terrible Grand Huit.

Frédéric Lanteri, the owner of a music studio, is found murdered after his daughter's wedding. Capitaine Marleau meets the closest friend of the Lanteri family: Daniel Rivière, a singer whose glory days are behind him and the idol of Marleau's youth. The sensitive performance of Kad Merad (Baron Noir) as the washed-up artist and his chemistry with Corinne Masiero/Marleau not wearing a cape (1) are the highlights of Quelques maux d'amour (the title sounds more Michel Bussi than Michel Berger).

Co-produced by Passionfilms and Gaspard & Co with France Télévisions and the support of Région Nouvelle-Aquitaine. With the participation of RTS - Radio Télévision Suisse and R.T.B.F. (Télévision belge). Produced by Josée Dayan and Gaspard de Chavagnac. Jean-Christophe Cardineau is the production manager. Cinematography by Stefan Ivanov. Editing by Yves Langlois. Music composed by Catherine Lara and Cyrille Lehn.

Songs performed by Kad Merad. Lyrics of S'aimer, Ta mémoire and L'impossible adieu by Jean-Jacques Thibaud (Music by Catherine Lara and Cyrille Lehn). Marc Eisenchteter is the story editor. Capitaine Marleau is available in the U.S. on VOD service MHZ Choice under the title Captain Marleau. Series created by Elsa Marpeau. Quelques maux d'amour will premiere on France 3 on October 29. 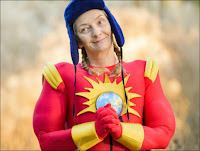 Capitaine Marleau (France's favourite gendarme) investigates in a fun park. Maybe next time she'll go to the zoo or she'll visit a museum.


Launched in 2015 on France 3, Capitaine Marleau stars Corinne Masiero as an offbeat gendarme with no first name. Produced and helmed by Josée Dayan (Les rois maudits, Les misérables, Le comte de Monte Cristo), the crime drama gradually became a ratings juggernaut and a pop culture phenomenon. Gaullic viewers know Marleau's chapka, her parka and her Range Rover Classic 1988 as much as Columbo's raincoat and his Peugeot 403. The lieutenant is an acknowledged influence of the character. In april, Capitaine Marleau hit another rating record with 7.70 million viewers (32.8%!)

The French public loves Corinne Masiero too. When she and Josée Dayan took a break from the series to shoot Quand sort la recluse, a 2X90-minute film of France 2's Collection Fred Vargas, 4.64 million viewers (20.65%) followed her for Part 1 (1). TF1 certainly hoped to cash in on the popularity of the actress with Colombine, where she starred in a very similar role except it was a nun in Africa! 5.2 million viewers (23.2%) watched this TV movie last month. Meanwhile, copycats of Capitaine Marleau regularly pop up on France 3, in Crimes parfaits or Alexandra Ehle (from Marleau's creator Elsa Marpeau).

Written by Pierre Delorme and Robin Barataud (Candice Renoir) with Corinne Masiero, Grand Huit will premiere in France on October 22. Alban Bouchard, who works in an amusement park called Spoutnik Park, is murdered in his "Spoutnik man" costume. Captain Marleau meets the owners, Lucie (Marina Hands) and Antoine Pavilla (Rapper and actor Joey Starr). The day before his death, Alban and his son Jordy had an argument. Major Boyer, of the gendarmerie, reluctantly cooperates with Marleau. 17 years ago, Lucie's father died on the roller coaster and the gendarmes ruled it a suicide. Marleau interrogates Henri, the handyman, and Lucie's brother Bertrand.

What the fans of Capitaine Marleau like most is neither the plots nor the guest stars (even Gérard Depardieu, David Suchet or Isabelle Adjani). It's when Corinne Masiero delivers Marleau's one-liners and social commentaries. With almost 8 million viewers, the series can afford everything. The star is known to ad lib, to the point that she's also credited with the writers. The title sequence of Grand Huit is almost a warning, because Corinne Masiero looks like she's freewheeling a lot in this episode only redeemed by its guest cast.

Co-produced by Passionfilms and Bel Ombre Films with France Télévisions and the support of Région Nouvelle-Aquitaine and Département du Lot-et-Garonne. With the participation of RTS - Radio Télévision Suisse and R.T.B.F. (Télévision belge). Produced by Josée Dayan and Gaspard de Chavagnac. Jean-Christophe Cardineau is the production manager. Cinematography by Stefan Ivanov. Editing by Yves Langlois. Music by Catherine Lara and Cyrille Lehn. Marc Eisenchteter is the story editor. Capitaine Marleau is available in the U.S. on VOD service MHZ Choice under the title Captain Marleau.

[Swiss transmission order] French pubcaster France 3's detective drama Crimes parfaits is a "semi-anthology" where a murderer known from the start thinks he/she has committed the perfect crime but a detective (different in every couple of episodes) proves him/her wrong.

It's the concept of the inverted detective story, popularized by Columbo though created in literature many years before the famous lieutenant.

The crime dramas of France 3 are a fully-fledged genre, recognizable from the postcard drone shots of their regional locations, the same actors jumping from one to another and stories sometimes so similar that you wonder if they are generated by some artificial intelligence. The channel is the happy home of Commissaire Magellan, Mongeville, Meurtres à... or ratings juggernaut Capitaine Marleau. The later is the most popular TV series in France, which certainly explains why Crimes parfaits is essentially a copycat factory of the gendarme played by Corinne Masiero.

One of Marleau's relatives is Police captain Louise Bonne ("Comme la poire"), played by actress and humorist Julie Ferrier. Introduced a year ago, she returns with her deputy and protégé Fatou (Wendy Nieto) in À la vie, à la mort and Trop beau pour être vrai. Juliette Petiot (Louise's teenage daughter Zoé) and Sophie de la Rochefoucauld, very funny as the ill-named pathologist Gracieuse, are back too. Humorist (another one!) and actor Mathieu Madénian joins the main cast as Grégoire, a sympathetic procureur.

The two episodes, penned by Marie-Anne Le Pezennec and helmed by Nicolas Herdt, try to show a bit of ambition within the limits of both the series format and the labored humour of the main character. Arié Elmaleh guest stars as Bruno Aubert, the murderer of À la vie, à la mort. Bruno is the director of a funeral home founded by his father. He gets rid of Alex, his best friend, who's also the godfather of his daughter. The man ends up embalmed! Capitaine Bonne and Fatou investigate. The feud between Louise and her husband escalates

Arié Elmaleh does an impressive rendition of the closest thing to a France 3 version of Dexter Morgan (Dexter) at the beginning of the episode. Also starring Joyce Bibring (Marine), Louisiane Gouverneur (Annabelle), Yann Pradal (Alex), Virginia Anderson (Cécilia), Antoine Cholet (Romain), Serge Feuillard (Gérard) and Simon Thomas (Joël). Sylvain Damal, the victim of Trop beau pour être vrai, is described by his colleagues, friends and neighbours as a sort of saint and even a hero. The wife of this director of a fish trading company and two of his employees beg to differ.

They plot his murder and make it look like a drowning caused by jellyfishes. One of the guest stars is the talented Christelle Reboul as Violette, a role far away from Amélie in Nos chers voisins (2012-2017). Since Capitaine Marleau, it seems that a lot of crime dramas of France 3 have their dedicated teams of gagmen. Also with Armelle Deutsch (Hélène), Jérôme Robart (Lucas), Christophe Favre (Marcel), Jérémy Gillet (Hugo), François Briault (Sylvain) and Vincent Bercholz (Mayor). Developed with Toma de Matteis. Produced by Caroline Lassa for Salsa Productions.

Co-produced by France.tvstudio and France Télévisions with Be-Films and RTBF (Télévision belge). With the participation of RTS Radio Télévision Suisse. Music by Maïdi Roth and Franck Pilant. Additional music by Flemming Nordkrog. Theme music of Crimes parfaits by Jean-Pierre Taïeb. Filmed with the support of Département de la Charente-Maritime.

Not yet shown by France 3.
[Update - October 2, 2020] Crimes parfaits will be available at the end of this month in the United States on the SVOD service MHZ Choice as Perfect Murders.