Detective Inspector Richard Poole, of London's Met Police, is assigned to the Caribbean island of Saint Marie. He's the best for solving crimes except he can't stand sun, sea, sand and heat.

His police station is resourceless. His partner, Detective Sergeant Camille Bordey, is French, and he must share a modest beach house with a lizard.

Series one of Death in Paradise (Meurtres au paradis in French), the BBC One hit crime comedy drama launched in 2011, is now available in France on DVD thanks to Koba Films.

« Look, don't get me wrong. I'm sure the Caribbean's great. And beach holidays and snorkeling. But I can't work here, let alone live here. I don't know if anybody noticed but there's a tree growing through my front room! »

Poole arrives on the (fictional) Caribbean island of Saint Marie from London to investigate the death of the Honoré police chief, found in the locked panic room of a Brit expat's mansion. Literally "unsuited" to the local way of life, he hates the sun, sea and beaches. The island is not the ideal workplace when you rely heavily on computer equipment, forensics or a laser tape measure. And Richard's methods are incompatible with the Saint Marie style of policing (« Pen-pusher. This is not going to go well.») Officer Dwayne Myers (Danny John-Jules, Cat in Red Dwarf) fraternizes with suspects and Officer Fidel Best (Gary Carr) shows his expertise in goats. Though they both prove to be dedicated and effective.

« It's 100 degrees in here and you're standing there in a suit and tie talking about duty solicitors!
- I'm a British policeman.
-  No?! You're kidding me! »

The "quintessential English" Richard Poole (« I'm a police officer and I want a cup of tea. ») must team up with top-notch French investigator Camille Bordey. Her mother, Catherine (Élizabeth Bourgine) has a bar on the island and doesn't get along with him. The uptight detective and his partner, more spontaneous, form an unlikely pair (« You are the most annoying man I've ever met. ») but Commissioner Patterson (Don Warrington) wants to keep him. Poole has a knack for solving complicated murder cases: a bride is killed with a harpoon on her wedding day, a voodoo priestess predicts her own murder, a band's frontman dies in a stage coffin, etc.

« Anyone know where the word alibi comes from? No? Latin. Somewhere else. Locative of the word "alias"... to pretend to be someone you're not!»

Death in Paradise has an ingenious formula for fun escapism with its fish out of water sleuth in the Caribbean. The excellent Ben Miller plays a Doc Martin version of Primeval's Lester, CGI lizard included, surrounded by an impressive list of guest stars (Rupert Graves, Frances Barber, Paterson Joseph, Miranda Raison, Colin Salmon et al.) Think Murder, She Wrote with nicer locations (the series is filmed in Guadeloupe) and humour. The plots are old school whodunnits often playing with the cliches of the genre. No wonder why the series deservedly became a global favourite amongst detective drama buffs.

« French, great. Just when I thought it couldn't get any worse. »

France 2 aired Series 1 and 2 back to back during summer 2013, with a different first series intro, episodes out of order and an unfortunate dubbing. Pubcasters in the French overseas departments and territories actually aired Death in Paradise months before. Atlantique Productions and France Télévisions didn't co-produce the second series. Koba Films releases the first series in a 3-disc DVD set with its original dialogue track (available with optional French subtitles) and its French dubbing.

Death in Paradise is produced with the support of the Region of Guadeloupe and the Film commission of Guadeloupe. The soundtrack includes ska and reggae standards  and original music by British composer Magnus Fiennes. Series 2 will be released on DVD in France next week. 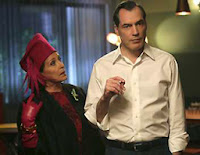 The commissaire Swan Laurence receives a letter from the rich Émilie Longuet, owner of the Filatures Longuet, in which she writes that someone wants to murder her. Except she died three months ago from jaundice and the letter was posted two days before he received it.

Alice Avril is getting bored with her broken hearts' column for La Voix du Nord and learns that commissaire Laurence ordered the exhumation of Émilie Longuet. But there's more annoying for Laurence than the presence of Avril: his whimsical mother Alexina is a close friend of Geneviève Ranson, Émilie's sole heiress.

In March 2013, Laurence and Avril succeeded the beloved crime-solving duo Larosière and Lampion, played by Antoine Duléry and Marius Colucci, and Les petits meurtres switched eras from the 1930s to the 1950s. Adapted from Dumb Witness by scriptwriter Thierry Debroux and directed by Marc Angelo, Témoin muet is the third Laurence-Avril after the enjoyable but transitional Jeux de glaces and the more familiar (and excellent) Meurtre au champagne.

Cynical and misogynist Laurence (« Je parle au seul neurone qui a osé s'aventurer dans votre cerveau. ») is back with his elegant suits, his chic Facel-Vega Facellia sports car and his stereotypical scatterbrain blonde secretary Marlène (Élodie Frenck). Now viewers are getting to know his eccentric mother, Alexina Laurence. She pretends she can communicate with the dead, wants her son to marry, to give her grandchildren, and is a (very) close friend of a chief suspect.

Témoin muet matches the best episodes of the Larosière/Lampion era. Thierry Debroux's script contains everything the fans of France's answer to Midsomer Murders could wish and even a little more, while keeping the spirit of Agatha Christie's work. The sets look as lavish as ever (Laurence's appartment) and the locations are splendid (château de Steenbourg). Let's hope Alexina will become a regular or semi-regular character.

Les petits meurtres d'Agatha Christie is produced by Escazal Films with the support of Pictanovo, Conseil Régional Nord-Pas-de-Calais and the participation of TV5 Monde and France Télévisions. Sophie Révil is the producer. The characters of Laurence and Avril were created by Sylvie Simon and Thierry Debroux. The music is by film and TV composer Stéphane Moucha (Das Leben der Anderen).