THE SUSPICIONS OF MR WHICHER: THE MURDER IN ANGEL LANE (ITV) 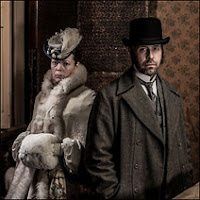 London, 19th century. Discharged from the Metropolitan Police for "mental unfitness", Jonathan "Jack" Whicher is no longer an inspector. In a dangerous quarter he saves a respectable country lady, Miss Susan Spencer, from a robbery.

She's desperately seeking her vulnerable 16-year old niece, Mary Drew, and Jack offers to help her. It turns out that Mary was mortally stabbed a couple of days after giving birth to a child. Jack Whicher finds the baby and Miss Spencer commissions him as a "private inquiry agent" to investigate the murder and locate the father.

The Suspicions of Mr Whicher: The Murder in Angel Lane is a two-hour sequel to the highly-rated The Suspicions of Mr Whicher, a feature-length crime drama aired on ITV in 2011 and based on the non-fiction best-seller by Kate Summerscale about the Road Hill House murder. The excellent Paddy Considine (Red Riding, The Bourne Ultimatum, Hot Fuzz) is back as real-life character Jonathan Whicher, a pioneering detective who inspired many literary sleuths. But this time Mr Whicher works outside the police force in this entirely fictional story penned by Neil McKay (Appropriate Adult, Mo), who wrote the first film.

This new case tests the limits of Jack Whicher's relationship with his former colleagues of the Detective Branch. From the backstreets of Victorian London to a private asylum via countryside manors it takes all his investigative skills to find answers while he's confronted to family secrets, powerful figures and to his own demons. The Murder in Angel Lane allows Paddy Considine to develop his subtle portrayal of the empathic but troubled ex-copper alongside a solid cast. McKay's compelling script and Christopher Menaul's experimented direction capture the spirit of the great Thames Television or Granada period detectives as the first Whicher did.

The production values are once again superb, like the photography by Tim Palmer and the music by Edmund Butt (Rob Lane scored the first Suspicions of Mr Whicher). Mark Redhead and Neil McKay exec produce. Rob Bullock is the producer. The Suspicions of Mr Whicher: The Murder in Angel Lane is produced by Hat Trick Productions for ITV. Last sunday it attracted 5.9m viewers/24.6% (including +1).