IT'S ONLY A MOVIE, INGRID (EPISODE 4)

In which Ingrid is asking herself if she should regenerate as the great Nikki Finke and call this notebook It's only a movie, Nikki...

Nikki Finke's Deadline Hollywood Daily scoops again and as usual with a most interesting news for those who follow the business of Television in America and in United Kingdom: Paul Telegdy, one of the top execs of BBC Worldwide America (Executive Vice-President of TV sales, content and production) is unexpectedly leaving the US commercial arm of the Corporation, and NBC wants him to become EVP in charge of unscripted and scripted entertainment (http://www.deadlinehollywooddaily.com/is-this-craig-plestis-replacement-at-nbc/). This would suffice to do sensation from our personal standards but Nikki adds that « the negotiations call for Telegdy to be given a bigger job like NBC Entertainment President in a year or to get paid off ». Which means he could then be in position to replace Ben Silverman (http://tattard2.blogspot.com/2008/09/things-to-watch-in-hollywoodland-when_1016.html), co-chairman of NBC Entertainment and NBC Universal Television Studio.

At BBC Worldwide America, Paul Telegdy has overseen the American adaptation of Strictly come dancing, Dancing with the Stars, (http://www.variety.com/article/VR1117985135.html?categoryid=3070&cs=1) and Viva Laughlin, the short-lived US remake of Blackpool (is « short-lived US remake » a pleonasm?) On previous Ingrid episodes we talked about the departure of Jane Tranter (the BBC controller responsible of fiction) to Los Angeles, where she's now Executive vice-president of programming and production at BBC Worldwide's North American production branch (alongside with Paul Telegdy, at the time of her appointment to the job).

If the arrival of Telegdy at NBC is confirmed, and with Jane Tranter in LA, the perspective of a US co-producer for Doctor Who will become yet more precise.

THE DOCTOR IS OUT

« Darling you got to let me know, should I stay or should I go ». It was really about time for Doctor Who to escape of one of its most weighing incertainties: the fantastic David Tennant has announced he won't return as the Doctor in 2010 (http://news.bbc.co.uk/1/hi/entertainment/7698539.stm). Remember that the fact that Tennant, one of the most popular Doctors of the History of the series, has been on on stage with the Royal Shakespeare Company is one of the reasons for the delay of Season 5 of the Hit show.

Remember also the infamous botched regeneration at the end of the first half of the finale of Season 4. And remember (« Remember, remember...») that there's a Next Doctor played by the excellent David Morrissey in the Christmas special this year. Well, when the Doctor will regenerate for good let's hope it will be as Morrissey. New face, new showrunners, nu-Who definitely needs a true regeneration. By the way, please read the reactions to this announcement on Behind the Sofa (http://www.behindthesofa.org.uk/2008/10/im-sorry-im-so.html#comments), the blog every Doctor Who fan must read once a day (at least...)

QUANTUM OF SOLACE: BUT HOW MUCH?

Ah, Nikki... Back to DHD again: Nikki Finke asks the $261 million Question about Quantum of Solace, the new 007 (really?): the ratio between the price tag of the movie and its 105 minute duration. $2.5 million per minute! Maybe the costliest film ever made minute by minute (http://www.deadlinehollywooddaily.com/new-bond-wannasee-double-casino-royale-questions-about-quantum-of-solace-cost/).

Canadian D.R. MacMaster (a.k.a. Furious D), author, writer, and Entertainment industry expert extraordinaire, has announced on his blog, The Fantastic Adventures of Furious D (http://dknowsall.blogspot.com/), that he's working on a book that will contain his impressive comprehension of the business of Cinema and Television and of its History, his sharp sense of analysis and his humor. All the ingredients that make us loving his blog (http://tattard2.blogspot.com/2008/08/its-only-movie-ingrid-notebook.html).
Publié par Thierry Attard à l'adresse 07:01 No comments:

BACK TO MEMORY LANE...

We don't do politics here and viral videos either. But this great video with Ron Howard, Andy Griffith and Henry Winkler, is a wonderful moment for those who grew up watching The Andy Griffith Show and Happy Days. Thanks to Nikki Finke and her blog for attracting my attention on this jewel(http://www.deadlinehollywooddaily.com/opie-andy-richie-the-fonz-for-obama/).

Quantum of Solace, the new 007 installment directed by Marc Forster, arrives in France and in the United Kingdom on October 31, and has been shown to the Press. This direct follow-up to 2006 commercially succesful « James Bourne » reboot, Casino Royale, has inspired mixed first reactions from critics who bona fide enjoyed the first entry with Daniel Craig as James Bond.

Lizo Mzimba, of BBC News (http://news.bbc.co.uk/2/hi/entertainment/7676637.stm), appreciates the characterization of Bond, as « the real interest lies in how Bond deals with the individuals and situations he meets along the way », and also the intentions of the helmers of the 007 franchise: « it's a brave step to push even further a lot of the themes developed in Casino Royale, especially the rediscovery of who Bond is, and why he is the way he is ». Two years after Casino he warns Bond rebooted adversaries that « The raw nature of the film may put off some who yearn for the days of gizmos, gadgets and Bond quips as he dispenses with faceless opponents ».

Kim Newman, of Empire (http://www.empireonline.com/reviews/reviewcomplete.asp?FID=134523), praises « a pacy, visually imaginative follow-up to the series relaunch » [...] « In an era marked by franchise bloat, it’s entirely admirable that Quantum of Solace is the shortest Bond movie to date – it drops a great many of the long-running series mannerisms (callous quips, expository lectures, travelogue padding, Q and Moneypenny) ».

David Edwards, film critic of The Daily Mirror (http://www.mirror.co.uk/news/top-stories/2008/10/18/first-review-of-new-james-bond-movie-007-115875-20815336/): is not disappointed but « just don't expect the brilliance of Casino Royale ». An opinion shared by Peter Bradshaw of The Guardian (http://www.guardian.co.uk/film/2008/oct/18/jamesbond1): « Quantum of Solace isn't as good as Casino Royale: the smart elegance of Craig's Bond debut has been toned down in favour of conventional action ». Bradshaw is impressed by Craig: « he carries the film: it's an indefinably difficult task for an actor. Craig measures up ».

Mark Monahan in The Telegraph (http://www.telegraph.co.uk/arts/main.jhtml?xml=/arts/2008/10/18/bfquantum118.xml) wonders « if director Marc Forster and screenwriters Paul Haggis and Neal Purvis haven't tried a little too hard to distance the film from traditional Bond plots » but agrees that « Craig inhabits the character with a ruthless charisma that never lets up. And he, above all, keeps you watching ».

Daniel Craig is the subject of a quasi-consensus: « Craig, it must be said, is excellent », writes Ali for The Shiznit (http://www.theshiznit.co.uk/review/quantum-of-solace.php), on the contrary of Marc Forster as director, « completely out of his depth handling a franchise this large. High-tempo sequences, like the opening car chase and an extremely Bournian rooftop pursuit, are disorientating in the extreme: too fast, too sloppy and too ruthlessly edited ». Obvious reference of the producers since Casino Royale, Jason Bourne becomes a problem... « perhaps former Paul Greengrass protege Dan Bradley (1) should be held responsible... »

Richard Brooks, Arts Editor of The Sunday Times, does his own Gunbarrel sequence (« It’s the audience who will need solace, 007 »): « It's James Bond, licence to bore. Quantum of Solace may be a sequel to Casino Royale but it lacks that movie’s panache and brio » (http://entertainment.timesonline.co.uk/tol/arts_and_entertainment/film/article4969426.ece).
The movie « lacks any wit, ironic or otherwise, which has been a strength of so many 007 films » and the title song by Alicia Keys and Jack White is « tuneless ». « At around one hour 40 minutes, this Bond is shorter than most. Somehow it felt longer ».

Two years ago, Casino Royale, left traces amongst French 007 aficionados after a raging debate between advocates of the relaunch and the fans of « Old School Bond ». François Justamand, editor of website La Gazette du doublage (http://www.objectif-cinema.com/rubrique.php3?id_rubrique=0168), contributor for http://www.jamesbond-fr.com/ (2), and one of the top experts about James Bond in France gives us his first impressions: « Action sequences suffer from an editing too rough, the movie lacks of familiars Bond "trademarks", some characters are not sufficiently developed (Fields, Greene), idem for the Quantum organization (perhaps further developed on next movies?), a bleak script, and an expeditive ending ». On the Plus side, François Justamand admits some intimate scenes, good dialogue from time to time, and some good ideas from the writers, like the coded conference of Quantum during La Tosca.

La Tosca retains the attention of Kevin Collette, journalist and Bond specialist, who considers the whole sequence is wasted by its « speedy editing a la Jason Bourne » (http://www.jamesbond-fr.com/news-1224530966-36-Un-Bond-post-moderne-.html). Bourne again, shall we like it or not we always go back to Bourne...

Update: Please have a look at this interesting and sometimes harsh discussion in the Comments section of a post on Nikki Finke's Deadline Hollywood Daily where Nikki develops on the Opening Box Office weekend of Quantum of Solace in Europe: http://www.deadlinehollywooddaily.com/bond-shatters-uk-box-office-record/.

(1) Stunt coordinator on the Bourne movies, second unit director on Quantum of Solace.

A CYBERMAN, THE DOCTOR AND THE TARDIS BY MY NEPHEW ERNIE, 91/2 YEARS OLD 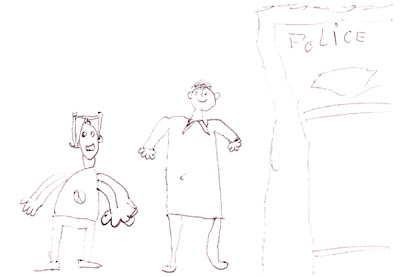 Email ThisBlogThis!Share to TwitterShare to FacebookShare to Pinterest
Libellés : Cybermen, Doctor Who, Tardis

IT'S ONLY A MOVIE, INGRID (EPISODE 3)

Ingrid is asking herself if the expression « Bear Market » means that at the end we have the right to eat the bear if it doesn't eat us first.

The Guardian has confirmed what the always excellent British newspaper calls « the worst kept secret in broadcasting »: Jane Tranter, the BBC controller of fiction, leaves her post to become Executive vice-president of programming and production at BBC Worldwide's North American production branch (http://www.guardian.co.uk/media/2008/sep/22/janetranter.bbc). Jane Tranter has more than contributed to make fictions from the Beeb the main export product of the Corporation, with shows such as the new Doctor Who, Life on Mars or Spooks/MI-5 (http://tattard2.blogspot.com/2008/08/its-only-movie-ingrid-episode-2.html). Now Ben Dowell asks the £ 100 000 question: How will Jane Tranter's departure affect BBC Drama, particularly with a lower-than-expected licence fee settlement? (http://www.guardian.co.uk/media/organgrinder/2008/sep/22/bbc.television)

Jane Tranter will be replaced by head of drama commissioning Ben Stephenson. There have been rumors that the BBC tried to tempt Jane Featherstone, co-founder of the Kudos production company (Spooks, Hustle...), to take the job. But we learn from Tara Conlan, one of our favourite signatures, that Featherstone has been appointed creative director of Kudos, while Stephen Garrett, co-founder of the company, becomes executive chairman - focusing on strategic and international development (http://www.guardian.co.uk/media/2008/oct/08/independentproductioncompanies.television).

We will see within two or three weeks what the US remake of Life on Mars will become, but now Fox Network is working on a remake of the mythical British sitcom Absolutely Fabulous (1992-2005) by the team behind the enjoyable Two and a Half men. This is the third attempt to remake Ab Fab, with the French movie of 2001 and a failed ABC project helmed by comedienne Roseanne Barr with Carrie Fisher involved.

Your humble French Nestle milk addict being too young for senility (40 next week), please see http://tattard2.blogspot.com/2008/08/young-barnaby-jones-chronicles.html to get his unasked opinion about remakes. Amusingly, I see that this Fox version has catched the attention of multi-talented Lee Goldberg (http://www.leegoldberg.com/about.html), author, writer, producer, TV Historian and expert, teacher, etc - a man often mentioned here (http://leegoldberg.typepad.com/a_writers_life/2008/10/absolutely-scary.html). We recommend you A Writer's Life (http://leegoldberg.typepad.com/), his blog, and his official site (http://www.leegoldberg.com/index.html).
15 MINUTES OF FAME...

Well, er, how to put it... the very nice folks of Beans on Toast, the French Doctor Who website, have published last month an interview of your servant - consultant for the French dubbing of season 3 of Nu-Who: http://www.doctor-who.fr/d_itw_attard.php. This interview is in French.
Publié par Thierry Attard à l'adresse 15:19 No comments: