Cornwall in 1783. Captain Ross Poldark returns from the American War of Independence to discover that his father has died, his estate is in ruins and his childhood sweetheart Elizabeth is now engaged to his cousin, Francis. His uncle Charles wants him away and is ready to pay him to make a fresh start elsewhere.

Ross stubbornly refuses, determined to rebuild his family estate. With only the help of his father’s useless servants, Jud and Prudie, he takes on a new kitchen maid, Demelza, after rescuing her from a beating. The first series of Poldark (2015) is now available on French Region 2 DVD from Koba Films.


Written by English novelist Winston Graham, the 12 books of the Poldark saga were published between 1945 and 2002. A hugely popular adaptation from BBC Television and London Films Productions, starring Robin Ellis as Ross Poldark and Angharad Rees as Demelza, ran for 29 episodes from 1975 to 1977. The eighth Poldark novel, The Stranger from the Sea was adapted by HTV for ITV in 1996 without the original Ross and Demelza. This latest version, launched in March 2015 on BBC One, was adapted by Debbie Horsfield (All the Small Things) from the first two novels: Ross Poldark (1945) and Demelza (1946). Ed Bazalgette directed episodes 1 to 4 of this first series, William McGregor helmed the remaining four.

The aptly cast Aidan Turner (The Hobbit, Being Human) leads a talented regular cast as Ross Poldark, a rebellious and dashing gentleman with a social conscience. Ross rebuilds Nampara, his estate, then reopens his father's mine in a depressed local economy with his hesitant cousin Francis (Kyle Soller). Francis Poldark is a good man who regrettably has many weaknesses, starting with his jealousy about Ross and Elizabeth (Heida Reed). Ross takes risks on all fronts when he challenges class prejudices by taking sides for the underprivileged against the elite and marrying his maid Demelza Carne. Eleanor Tomlinson (Death comes to Pemberley) plays the smart and adaptive young woman. Demelza helps Verity (Ruby Bentall), the cousin of Ross, to reunite with her lover, Captain Andrew Blamey (Richard Harrington).

Beatie Edney and Phil Davis (Whitechapel) are fabulous as Poldark's couple of servants Prudie and Jud Paynter. The actions of Ross Poldark are under scrutiny of the Warleggans, a wealthy familly who rised from poverty to become powerful bankers and industrialists. Frustrated by Ross' rejection of his friendship, the cynical and scheming George Warleggan (Jack Farthing, excellent) becomes his enemy. Warren Clarke (Dalziel and Pascoe, In the Red, A Clockwork Orange), who portrays Charles Poldark, died in November 2014. The first episode was dedicated to this great actor at the time of its transmission. Pip Torrens (Cary Warleggan), Caroline Blakiston (Aunt Agatha) and Luke Norris (Dr. Dwight Enys) are amongst the other regulars.

The 2015 Poldark is ideal for period drama lovers and those who enjoy quality dramas in general. The production values are top-notch, the scenery is magnificent, the required romance, intrigue and action are there. Everybody in the crew and cast did a superb job to deliver an instant classic. This first series of Poldark is an invitation to read the books, watch the 1975 series, and visit Cornwall of course. Bonus material of the three-disc DVD set from Koba Films is comprised of three featurettes: Poldark, un personnage iconique (Poldark - The Man), Poldark et les femmes (Poldark's Women) and Les coulisses (Poldark - Behind the Scenes). The episodes are in French or English (with optional subtitles).

Television series are watched all over the world. They are adored, hated and reviewed. Everybody has an opinion on them, including those who don't watch them... or pretend that they don't. This opinion is often based on perception rather than facts. In France, some circles forget that television is the 8th art and are still prejudiced against television fiction vs cinema (le 7ème art).

French journalists Alain Carrazé and Romain Nigita are both their new book (published by Fantask), they generously share this expertise and their passion to explain with clarity, intelligence, but also a bit of humour, how series are made and shown.

From the conception of a television series to its broadcast or release (on SVOD and DVD), Series' Anatomy: Le 8e art décrypté covers the subject in all its aspects: creative and artistic (the showrunner, the writers, the formats, the actors), historical (how Lucille Ball revolutionized the TV industry), geographic (where series are filmed), technical (film or video, HD, special effects, etc...) and economic (financing and budgets, promotion, the US, the UK and French markets). Instructive and absorbing, the impressive work of Alain Carrazé and Romain Nigita rely on their tremendous erudition and a long experience of the television business. Their book is astutely structured around 19 clichés/stereotypes arising from the so-called inferiority of TV compared to cinema, or particularly active these days.

Series' Anatomy: Le 8e art décrypté reminds that television fiction knows the auteur since Reginald Rose, Paddy Chayefsky and Rod Serling (before he created The Twilight Zone). Film adaptations of series didn't start in 1993 with The Fugitive. Actually, TV characters jump to the big screen since the 1950s. Long before the movie versions of Baywatch (2017) and The Man from U.N.C.L.E. (2015), The Quatermass Experiment, Dragnet, Doctor Who and many more preceded them. "Franchises" existed in the 1970s and 1980s (The Muppets, Star Trek). Remakes, reboots, and sequels are not a "new trend". There is more than one "Golden Age of TV series". In France subsists a confusion about the distinction between daytime soaps, primetime soaps and sitcoms. And a series doesn't land on a broadcaster by chance.

Series' Anatomy: Le 8e art décrypté is punctuated with practical cases in the form of interviews (such as Betsy Beers, Frank Spotnitz or Greg Nicotero), analysis (David Milch, how Baywatch was saved after being cancelled by NBC) and immersions on filmings (The Sopranos, Friends, Game of Thrones, A French village), in a press junket and on the L.A. Screenings. Comprehensive, the book can be read from beginning to end or consulted by chapter. Series' Anatomy: Le 8e art décrypté is essential reading for series fans, regular or casual viewers, journalists, academics, or simply people who have questions on this theme. It's one of the most important recent books on television fiction with Les nouveaux feuilletonistes, an anthology of Alain Carrazé's interviews of the greatest series creators, writers, producers, actors and directors (Fantask, 2016). 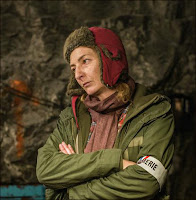 [Spoiler-Free review] The corpse of Arthur Gerfaut, a teenager who disappeared six years ago, is found by a group of cyclists near a disused gold mine. His father, Hervé Gerfaut, is in prison for the murder of his wife.

Capitaine Marleau investigates. Gerfaut, who proclaims his innocence, escapes during the burial of his son.

The extraordinary Corinne Masiero faces the great stage, movie and television actor Niels Arestrup as Hervé Gerfaut. Belgian actor Daniel Hanssens plays Max Boilon, a retired gendarme dressed like the Blues Brothers, who assists the capitaine (1). Sara Martins (Death in Paradise) guest stars as activist Irene Ruff. Marleau starts the episode in a stretcher, wants to play golf and meets bikers. La mémoire enfouie is a festival of brilliant dialogues, one of the trademarks of Stéphan Guérin-Tillié. He definitely ranks amongst the best writers of Capitaine Marleau.

(1) Let's hope that this character will return.
(2) Air date unknown. 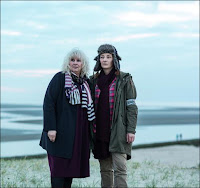 Someone tries to murder Catherine Rougemont, ex-colonel of the Gendarmerie and owner of a small seaside hotel. Capitaine Marleau, who served under Rougemont 20 years ago, is convinced that Catherine knows the culprit. Except that her former superior won't talk.

Rougemont wants to protect women she hides in her establishment because they are victims of violence. But also her 16-year old grandson, whom she raised alone since the brutal death of his parents.

The bottom line: As long as Marleau avoids "Columbo as a ringmaster" stuff (1), everything will be OK.

LAST MONTH ON THIS BLOG (OR NOT)

Hated the first two episodes of Star Trek: Discovery. In an unusual move for your humble servant (patience is not one of my virtues, I'm afraid), I'll wait for the arrival of Jason Isaacs to have a definitive opinion on this new Star Trek series. Because it's Star Trek.

I love the new DuckTales. It's America's answer to Danger Mouse 2015. And the casting of David Tennant as Scrooge McDuck is pure genius.
Publié par Thierry Attard à l'adresse 11:51 No comments: