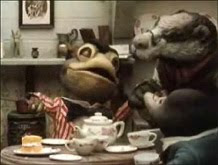 Once again I also sincerely thank you for your constant interest, your enduring fidelity, your support and your trust.
Publié par Thierry Attard à l'adresse 10:58 No comments:

COOL AND THE GANG

The seventh series of Hustle begins on Friday January 7, 2011 at 9pm (British Time) on BBC One.

TV Choice has an interview of the excellent Matt Di Angelo, who plays Sean Kennedy since series five of the hit show. Kelly Adams, aboard since the fifth series too, is back as his sister Emma.

Hustle is a Kudos Film and Television production in association with Red Planet Pictures for the BBC (with the support of Screen West Midlands).

THE STAMP OF GENIUS 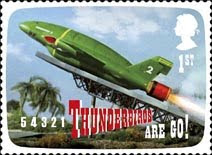 On January 11, 2011, Royal Mail will issue a set of stamps marking the 50th anniversary of the puppet TV series of Gerry Anderson (Supercar, Fireball XL5, Stingray, Thunderbirds, Captain Scarlet and The Mysterons). This set is called FAB: The Genius of Gerry Anderson.

The next logical step would be definitely to knight Gerry Anderson. It would be about time.

THE BLANKS TO TOUR THE UK

[10.57 - French Time] Chortle reports that American comedian and actor Sam Lloyd, who played hospital lawyer Ted Buckland in Scrubs from 2001 to 2009, is to tour the UK with his sketch and a cappella group The Blanks.

Comical genius Sam Lloyd and The Blanks are performing 10 dates in the UK, and one in Dublin in February – the biggest being the Shepherds Bush Empire in London on February 12 (dates available on Chortle).

Some years ago your humble servant had the honour to interview Lloyd and we evoked The Blanks as its members appeared regularly in Scrubs, with wonderful renditions of TV theme songs and other things.

Doctor Who - A Christmas Carol. Newlywed couple Amy (Karen Gillan) and Rory Williams (Arthur Darvill) are aboard a Galaxy Class liner for their honeymoon. But the spaceship is about to crash and only the Doctor (Matt Smith) can save them and the passengers. Only if he succeeds in making a grouchy old rich man better.

Each Christmas since 2005 the mandatorily lavish Doctor Who special is the highlight of BBC One's holiday programmes. Previously our favourite time lord saved the Earth from alien invasions, deadly Santa Claus robots, a space Titanic, Victorian era Cybermen and even Timothy Dalton as Ming the Merciless. No such extravaganza this year but Who supremo Steven Moffat's rather clever twist on A Christmas Carol by Charles Dickens, a classic adapted a gazillion times. Even soap opera character icon Victor Newman got the Ebenezer Scrooge treatment in The Young and The Restless last week.

Directed by Toby Haynes, Moffat's own Christmas Carol opens with the intrusion of "Mr and Mrs Pond" on the command deck of their honeymoon spaceship and judging from their costumes the incoming catastrophy is rudely interrupting something. This hilarious pre-credits sequence clearly has the epic flare of past specials and the knack of Steven Moffat for adult comedy. Arthur Darvill's name is deservedly on the opening titles, but curiously not the two prestigious guest stars: acting royalty Sir Michael Gambon and singer Katherine Jenkins.

Michael Gambon plays a Scrooge-like character named like a Mission: Impossible villain, Kazran Sardick ("Good morning Doctor Phelps, this man is Kazran Sardick.") Of course Gambon is, as always, beyond brilliant. The same has been said of Sir Ian McKellen in the infamous Prisoner remake, which is not surprising as the two veteran thespians could move you just by chanting their shopping lists. And the first scenes with the grumpy old miser are great, with just the appropriate touch of "icy cool" humour and a contemporary political subtext.

Michael Gambon in a Doctor Who Xmas special is a safe bet for the show's bosses and a treat for viewers. But the choice of Katherine Jenkins for "her first major acting appearance" (1) is somewhat puzzling, especially when the episode goes BBC Proms sings Christmas for the shark of Jaws 38. Too bad we can't get more of the newlyweds instead and more true interaction of the Williamses with the Doctor. And too bad most of the work of production designer extraordinary Michael Pickwoad (Whitnail and I, Lost in Austen, The Prisoner 2009) is plunged in the dark.

The sled pulled by Bruce's cousin is the most cringy thing in the History of modern Doctor Who since a certain flying bus. And sorry, no thanks for all the fish... but stetsons are "cool". To end on a positive note please read the review of this Christmas Carol by the respected, erudite and talented blogger Frank Collins (http://cathoderaytube.blogspot.com/2010/12/doctor-who-christmas-carol-review.html). Frank is a specialist - among so many subjects - of Doctor Who, and the author of The Pandorica Opens, a book exploring series five (http://www.classictvpress.co.uk/pandoricaopens.htm). 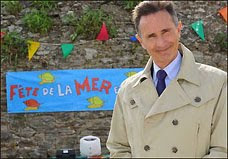 The French Doc Martin is produced by Ego Productions (a Groupe Carrere subsidiary) and is the result of a deal between DRG - distributor of the original show starring Martin Clunes - and TF1. A German version, Doktor Martin, ran in 2007 and 2009 on pubcaster ZDF, and Spanish viewers have their own version called Doctor Mateo since 2009 (on Antena 3).

The incoming French version raises a lot of interest and curiosity both in France and in the United Kingdom - where Doc Martin is a huge hit. Series 4 aired in Autumn 2009 on ITV1 with strong ratings against Waking the Dead or the Emma starring Romola Garai. Martin Clunes will be back as grumpy Dr Martin Ellingham in 2011 for a fifth series. 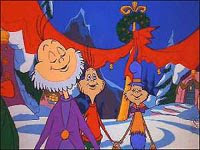 Since November things here are slightly complicated by the charms of "urban renewal" works and by other delights which give our little Upton Abbey the unique ambiance of East Berlin in a Harry Palmer movie.

Anyway allow me to wish you, faithful readers or new visitors, the best holidays possible. Let me also thank you for your fidelity, your trust and your interest.
Publié par Thierry Attard à l'adresse 10:42 1 comment:

[10.06 - French Time] Broadcast reports that Tony Jordan (Hustle, Life on Mars, Ashes to Ashes) is to exec produce a £9m police drama set in the Caribbean, which will be co-produced for BBC One and French pubcaster group France Télévisions.

Death In Paradise, a 8 X 60-minute drama, is centered around English police detective inspector Richard Gill, who has a strong dislike of travel, as he is posted to the West Indies island of Sainte Marie. It is produced by Tony Jordan's Red Planet Pictures and French company Atlantique Productions in association with BBC Worldwide (which brokered the funding) and Kudos Film and Television.

Casting of this UK/France co-production is currently underway. Death In Paradise is due to start filming in Guadeloupe in April.

[8.54 - French time] This thursday ITV1's venerable soap Coronation Street will turn 50 and ITV celebrates the event with a week of special shows.

Yesterday ITV1 aired the very first episode of "Corrie", originally shown on December 9, 1960. This was the occasion to see a young Ken Barlow, played by William Roache. The actor, now 78, is still in the drama serial and according to The Independent his character has been married four times (twice to the same woman), widowed twice and divorced once. His first wife was electrocuted in 1971 by a faulty hairdryer, although not before giving birth to twins. Add two other children, both illegitimate.

Ken Barlow's second wife died in 1977 after taking an overdose. He has had 27 girlfriends and almost as many jobs (http://www.independent.co.uk/news/people/profiles/william-roache-the-role-of-a-lifetime-2150841.html). In 1981, 24 million viewers watched the wedding of Ken with Deidre Langton (Anne Kirkbride) – more than the audience of Charles and Diana’s wedding on ITV two days later (http://www.beehivecity.com/television/50-coronation-street-facts-for-the-50th-anniversary-of-itvs-soap12212112/).

The repeat of Coronation Street's episode one was followed by the highly-publicized tram crash disaster, a very spectacular stunt which reportedly costed over £5m (http://www.digitalspy.co.uk/soaps/s3/coronation-street/news/a291503/corries-tram-crash-plot-costing-over-gbp5m.html). This week of celebration also include a two-part retrospective show titled Coronation Street: 50 Years, 50 Moments, a 60-minute live episode aired on thursday, and Coronation Street: The Big 50th, a one-off quiz show hosted by Paul O'Grady which will test celebrities' knowledge of Corrie history.

The actual Coronation Street producer is Phil Collinson, formerly producer on Doctor Who.

[19.32 - French Time] Premiere of the seventh series of Hustle is announced by the BBC for early January 2011.

In Episode One of the six-part new series, Anna Chancellor guests as ruthless Wendy Stanton, CEO of Model Devotion, a modelling scam. The perfect adversary for the gang and Mickey, who poses as emerging fashion guru "Hilary King".

Hustle is relocated in Birmingham since previous series in order to contain production costs and receive welcome subventions thanks to a deal with Screen West Midlands. But the team's playground remains set in London, except this year for one episode set where it is filmed.

The con artist drama is a Kudos Film and Television production in association with Red Planet Pictures for the BBC (with the support of Screen WM).

[22.12 - French Time] In October Entertainment Weekly reported that the CW's version of Nikita, which debuted in september, was about to get a retooling.

Michael Ausiello, then at EW, explained that the network was looking to "lighten the show’s somber mood and jack up its title character’s love life" in order to boost the young female demo. Ausiello reported that several new characters would be introduced, including a confidant and potential love interest for Nikita (Maggie Q).

Nikita originated as a 1990 movie directed by Luc Besson, with Anne Parillaud and a US remake Point of No Return (1993), with Bridget Fonda. In 1997 the movie(s) became a TV show called La Femme Nikita starring Peta Wilson. In the 2010 version Nikita, an assassin working for a spy agency called The Division, goes rogue and her former employers want her back at any price before she destroys them. Meanwhile, young Alex (Lindsy Fonseca) becomes the Division's newest recruit but is actually Nikita's inside mole.

Now we learn from EW's Tim Stack that Alex will work with Nikita on the outside and will get a "potential" love interest played by Thad Luckinbill. Years ago Luckinbill played Fonseca’s love interest on CBS's soap opera The Young and the Restless, where he was J.T. Hellstorm and she played Colleen Carlton.