In Saignac no one can hear you scream.

Magellan is part of the very popular regional crime drama line-up of France 3 and even crossed over twice (in 2016 and 2018) with Mongeville, another hit of the channel. Jacques Spiesser is always brilliant as the debonair (and sarcastic) detective in those old school whodunnits, built according to a proven formula, which deliver exactly what the fans like and expect. In many respects, this  heir to Les cinq dernières minutes, Navarro (a production of Jean-Luc Azoulay) or even Derrick (1) is France's answer to Midsomer Murders. Written by Lucile Brandi, Pascal Perbet and Nicolas Durand-Zouky, Sang d'encre is directed by Étienne Dhaène. It's the 35th episode of Commissaire Magellan.
Adrien Beauval, a famous crime writer, returns to Saignac after 15 years for a book signing event in the shop of his friends Virginie and François Coudrier. Much to the disappointment of his readers and even his publisher, he announces that he will end his bestselling "Commissaire Aristide" series. He's murdered a few hours later and his body is found in the bookshop. Magellan and Selma discover some rumours of plagiarism, publishing rivalries and secrets from the author's past. Simon's ex-wife Barbara wants to introduce Édouard, her new boyfriend, to him and Cordelia. Ludo likes horoscopes, Selma runs and Édouard comes to dinner.
The murders are off-screen, the crime novelist element is underused and the drone shots are annoying. But all the ingredients of Commissaire Magellan are there and actor/former gameshow host Thierry Beccaro is very funny as Édouard. Guillaume Denaiffe, who plays François Coudrier, had a different role in Magellan et Mongeville (2016). Agnès Soral first played Barbara in an episode from 2011. Also with Guillaume Cramoisan (Zacharie Dubreuil), Ludovic Beaude (Vaugan), Gaëla Le Devehat (Virginie), Carole Brana (Élodie Mérove), Bruce Tessore (Astrid et Raphaëlle, Plus belle la vie) as Adrien Beauval, etc.
Produced by Richard Berkowitz. Exec produced by Bernard Paccalet. Nicolas Durand-Zouky is the head writer. Melissa Kajdan Smila is the production manager for JLA. Elizabeth Bonnay is the production manager for France Télévisions. Music by Frédéric Porte. Cinematography by Thierry Jault. Filmed in the Département du Nord. Commissaire Magellan is available in the U.S. on VOD service MHZ Choice under the title Magellan. Apparently, France 3 has decided to axe both Mongeville and Commissaire Magellan (2).
(1) Not to mention, Les Cordier, juge et flic (naturally).
(2) https://www.leparisien.fr/culture-loisirs/tv/francis-perrin-l-arret-de-la-serie-mongeville-serait-incomprehensible-et-ridicule-04-07-2020-8347209.php + https://www.programme-tv.net/news/series-tv/259819-apres-mongeville-la-serie-commissaire-magellan-va-t-elle-sarreter/
Publié par Thierry Attard à l'adresse 10:28 No comments:

PREVIOUSLY ON THIS BLOG 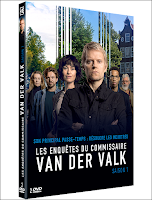 The best series of Agatha Raisin to date.

Aired by pubcaster France 3 as Les enquêtes du commissaire Van der Valk, this contemporary adaptation of the character created by English author Nicolas Freeling is available here on DVD from this week thanks to L'Atelier d'images (https://www.latelierdimages.fr/produit/les-enquetes-du-commissaire-van-der-valk-saison-1/).

These are our last reviews of Capitaine Marleau. We humbly supported the megahit of France 3 even before they aired the pilot but it's now blatantly insufferable, judging by one of the two new episodes coming on the channel this month (I didn't watch the other).