Both are directed as usual by Josée Dayan, who co-produces the series. In Le jeune homme et la mort, the first violinist of the Eckert Quatuor is found dead in a pond a few days before a concert. Capitaine Marleau questions the famous musician Alexandre Eckert and his entourage.

The bottom line: Étude in Grey.


Maybe the bar was set too high with the very good Sang et lumière. Past the beautiful locations, Le jeune homme et la mort struggles to meet the quality standards of Capitaine Marleau. The plot seems right out of an episode of Midsomer Murders. The guest cast (except Stanislas Merhar) ranges from uninspired to unconvincing. Marleau looks likes she tries hard to resist a urge to leave gendarmerie for a comedian job. Worst, Le jeune homme et la mort is a missed opportunity to do with classical music what Brouillard en thalasso succeeded with classic dance.

Both are directed (as usual) by Josée Dayan, who co-produces the series.

It's le choc des cultures between the offbeat French gendarme and the former Yard sleuth while Marleau investigates amongst the population. Angus, the husband of Maggie's best friend Jenny Sullivan, can't stand her because he thinks she's trying to convince his wife to divorce. Maggie keeps a blog about local tourism where she's particularly harsh towards the Verterac Hôtel. Its owner, Ulysse Verterac, tried to commit suicide and his daughter Lucie is back in the village. Yvon Barbet, Jenny's lover and Lucie's friend, loses his van in a molotov cocktail attack. Does someone targets those who signed a petition against wind turbines installed in a nearby village?

Capitaine Marleau is the most popular French drama of 2017, no less. This incredible success is owed partly to the character, who first appeared in Josée Dayan's miniseries Entres vents et marées (2014), and partly to the amazing Corinne Masiero. What a better way to celebrate it than to invite a British television legend alongside the beloved actress. Sang et lumière is a very good episode. However, we could have done without a bad joke, a couple of over-the-top moments and the closest thing to a jump the shark scene (Marleau as Eleonor of Aquitaine at the end). Filled with excellent lines, the smart script gives David Suchet a role worthy of his tremendous talent.

The rest of the guest cast is quite interesting. Jérôme Kircher (The Returned), who often works with Josée Dayan, plays Thomas Chapuizet. Amusingly, he appeared in the pilot as an acting teacher and even had a part in Entre vents et marées. Jenny Sullivan is played by New York born actress and model Nancy Tate. Bartholomew Boutellis (Yvon Barbet) and Léo Dussollier (Lieutenant Etienne Vasson, nicknamed "Docteur Vasson") are two actors who deserve to be followed with attention. Geoffrey Carey is fantastic as Harold, the hilariously hysterical stage director ("Peter Brook Shields"). Lucie Verterac is played by Laura Smet.

A traveling salesman and a young woman are found dead in an apparent car accident. In her pocket there's a piece of paper with the address of Alice Avril (Blandine Bellavoir).

But Alice has vanished and Marlène Leroy (Élodie Frenck) is the only person who seems to care. A woman from the past of Commissaire Laurence (Samuel Labarthe) resurfaces in his life.

Les petits meurtres d'Agatha Christie returned this week on Swiss channel RTS Un, ahead of France 2. Written by Catherine Hoffmann & Bertrand Lorel (with dialogues by Catherine Hoffmann & Zina Modiano), Meurtres en solde is adapted from Agatha Christie's novel Hercule Poirot's Christmas. Two months after the death of Marilyn Monroe, Marlène still mourns for the star and she's a bit conspirationist on what happened to her idol (« Ces monstres l'ont tué! ») A young man named Thierry Noël bursts into the commissaire's office. He's charged with theft at the department store Au Bon Temps, where he works like his mother. Swan summons her, much to his surprise because Mathilde Noël happens to be a woman he loved during the war.

Mathilde announces to Laurence that Thierry is his son! The commissaire asks pathologist Timothée Glissant (Cyril Gueï) what he knows about paternity testing. Marlène tries to find Alice, who has gone AWOL from La Voix du Nord. The reporter reappears at the Lille police station with a doctor as she's actually amnesiac. Later, Simon Krepps, the unpleasant owner of Au Bon Temps, is brutally murdered. Directed by Didier Bivel, Meurtres en solde is an absolutely perfect balance between the spirit of Agatha Christie's work and the comedy which made the popularity of the Laurence/Avril/Marlène trio. Humour mainly comes from the finely wrought dialogues (« Oh! Vous vous êtes déguisée en femme. ») The excellent guest cast is blessed with the presence of the great Aurore Clément (Elisabeth Krepps) and the talented Jacques Frantz as Simon Krepps.

[Spoiler-Free] Why is Josef Matula with a forehead injury and pursued by men who look like hunters? Wasn't he supposed to be on holidays in Italy with his dog Renz?

Claus Theo Gärtner (born in 1943) first portrayed the street-smart, working-class Hermann Josef Matula in Ein Fall für Zwei ("A case for two"). The long-running series, created by Georg Althammer and Karl Heinz Willshrei for Galmon Film (later Odeon Film), was about a private investigator and a defense attorney who solve crimes in Frankfurt am Main. Matula was 31 when it started on pubcaster ZDF in 1981. When his partnership with Dr. Dieter Renz (Günther Strack) ended in 1988, the character teamed up with three other lawyers: Dr. Rainer Frank (Rainer Hunold, 1988-1997), Dr. Johannes Voss (Mathias Hermann, 1997-2000) and Dr. Markus Lessing (Paul Frielinghaus, 2001-2013).

In autumn 2011, Gärtner expressed his desire to leave after 30 years. The duo Matula-Lessing bowed out with the 300th episode in March 2013. Surprisingly, ZDF decided to revamp Ein Fall für Zwei around attorney Benjamin "Benni" Hornberg (Antoine Monot, Jr.) and p.i. Leo Oswald (Wanja Hues). With the same title but minus the famous theme composed by the great Klaus Doldinger (The Neverending Story, Das Boot, Tatort), the new version debuted in May 2014. Claus Theo Gärtner even had a cameo in a 2015 episode. Last year, the legend returned in his own 90-minute special, Matula (aka Matula - Wer Wind sät), written by Ben Braeunlich and directed by Thorsten Näter.


5.26m viewers (16.8%) watched this brilliant comeback TV movie, aired by ZDF on Good Friday. Hence the commission of Matula - Des Schatten des Berges, an equally brilliant new case from the same writer and helmer. Josef Matula travels to Italy with Renz, his dog named after his first lawyer partner. They're in the Allgäu Alps when his Volkswagen minibus breaks down close to a winter sports resort. Josef stay with Renz at a guest house during the repair of his vehicle. At the inn, he witnesses an altercation between Martin Wiesner, the butcher, and businessman/mayor Peter Otting. Later, Matula walks near the mountain when he finds the body of Wiesner.

The local police concludes it was an accident. The detective disagrees and leads his own investigation against the villagers. Though clearly classic, the plot has all the ingredients that Ben Braeunlich successfully used in the previous film, starting with an appropriate sense of self-derision. Claus Theo Gärtner is masterful as the underdog old school private detective who still has resources. Director Thorsten Näter and cinematographer Joachim Hasse know how to take advantage of the gorgeous locations. The guest cast is perfect and it's quite moving to see the great Hans-Michael Rehberg (who plays Father Bornholt) in one of his final roles for television (1). 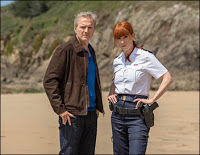