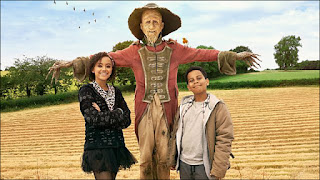 We wish you in advance all the best for 2020.
Publié par Thierry Attard à l'adresse 18:48 No comments:

[Favourite of the Month] Claudia Tagbo shines as the new sleuth of France Télévisions (the biggest police station of the French TV industry).

The bottom line: The title says it all.

English expat Harry Fergusson, a famous author, is murdered and his death is made to look like a car accident. Capitaine Gaby Molina, her neighbour, quickly suspects foul play because of a detail. Jean Servais, her counterpart in the gendarmerie, already investigates and won't collaborate. Gaby is supposed to be busy with a ketamine trafficking case and the arrival of Lieutenant Céline Richer, her new partner. On a personal level, she moonlights as a security guard in a nightclub and sells truffles in order to keep her farm (inherited from her grandfather).

Le crime lui va si bien will not revolutionise the genre but its 90 minutes are very pleasant. Claudia Tagbo is fabulous as a Columbo of the French countryside with a cap, a scarf and an old Volvo. The lieutenant is a major influence of France 3's ratings juggernaut Capitaine Marleau and Crimes parfaits, another success of the channel. Céline Richer is played by the excellent Hélène Seuzaret (Le pont des oubliés, Das Boot). The always great Bruno Lochet plays Anton Vargas (a tribute to Fred Vargas?)

Le crime lui va si bien won the Grand Prix of the French-speaking TV movie 2019 at the Cognac Polar Festival. It will premiere this Friday on France 2 and hopefully a series will follow. Claudia Tagbo currently plays Oda Mae Brown in the musical adaptation of the movie Ghost on stage at the Théâtre Mogador.
Publié par Thierry Attard à l'adresse 08:37 No comments: