Written by Marc-Antoine Laurent and Jean-Marc Taba with Elsa Marpeau (who created Capitaine Marleau), Les roseaux noirs is helmed as usual by director and series co-producer Josée Dayan. It's a return to quality for France 3's crime drama after the disappointing Le jeune homme et la mort and the odd Double jeu, with a good whodunit around a racing track, effective dialogues and Corinne Masiero at her best.

(1) The captain's most popular deputy, played by Aymeric Demarigny in several episodes. 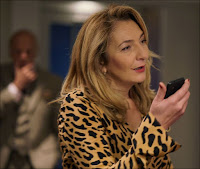 Capitaine Marleau (Corinne Masiero) is called by an ex-colleague because of a corpse found off the coast. The dead woman, Bénédicte Dalvet, is a perfect lookalike of Marleau

Bénedicte was the captain's twin sister but the detective didn't even know her existence. Marleau decides to impersonate her in order to investigate.

The bottom line: And Now for Something Completely Different.

Double jeu is a first for France 3's ratings juggernaut crime drama Capitaine Marleau. Written by series creator Elsa Marpeau, the episode is based on the novel Le sosie de la morgue by Claude Luxel (pseudonym of Lucien Riffard). Published in 1935, the book was adapted for the first time in 1949 as Entre onze heures et minuit. This  film, directed by Henri Decoin, was written by Marcel Rivet and Decoin with Henri Jeanson. Louis Jouvet portrayed a Parisian cop, Commissaire Carrel, who takes advantage of his striking resemblance with a murdered mobster to investigate as the victim. Madeleine Robinson played the mobster's mistress.

Director Josée Dayan, who helms and co-produces Capitaine Marleau (with her company Passionfilms), wanted to film her own adaptation of Le sosie de la morgue in 2015 with Gérard Depardieu and Fanny Ardant but the movie wasn't made. The same year, Depardieu became the special guest star of Capitaine Marleau: Philippe Muir (the series pilot). Regrettably, Double jeu is both an unsatisfactory substitute to Josée Dayan's film project and a rather odd departure from the format of Capitaine Marleau. Not unlike when Columbo, one of the inspirations of Marleau, tried to adapt a couple of Ed McBain books with unfortunate results.

Marleau clumsily goes undercover amongst the family and professional entourage of Bénédicte Dalvet in a plot where France's favourite detective and her origin story feel shoehorned. Pierre-François Martin-Laval's performance as Paul Dalvet is quite touching. Producer and former talent agent Dominique Besnehard drops by as a private investigator. Jacky Berroyer plays Dr. Aboumehri and French singer Pierre Perret appears as Mr. Pellisson, a character linked to Marleau's past. Fans' favourites Aymeric Demarigny (Brière, the captain's most popular deputy) and Jean-Claude Drouot (Pathologist Léopold Salaun) are back.

In which Marlène Leroy and Alice Avril discover that the record industry can be deadly. And Commissaire Laurence has a haunting problem.

Nicky is shocked and soon Franck Soler, her producer, replaces his protégé with "Shirley", who's none other than... Alice. Meanwhile, Swan can't forget the memory of Dr. Euphrasie Maillol. Mélodie mortelle is almost excellent, apart from the surreal return of the character played by Natacha Lindinger. The dialogues are fabulous and the original songs, between "Yé-yé" and the sitcoms from AB productions, are very ingenious. Blandine Bellavoir, who has great comedy moments, looks like she had fun singing (she also sung in Le crime ne paie pas). Élodie Frenck and Dominique Thomas (Tricard) are particularly brilliant. Amongst the guest cast, David Ayala (Soler) reminds of the legendary Paul Mercey.

[Favourite of the Month] Man from Atlantis, the US sci-fi television series aired on NBC in 1977-1978, is now available on DVD in France thanks to LCJ Éditions. This set contains the 90-minute pilot and the three TV movies which preceded 13 one-hour episodes.
Patrick Duffy, before becoming famous with Dallas, stars in his first major role. He plays a humanoid with webbed hands who can breath underwater and swim very fast (amongst many abilities). Amnesiac but believed to be the last citizen of Atlantis, he's named "Mark Harris". Mark  works with Dr. Elizabeth Merrill of the Foundation for Oceanic Research to learn about humans while she tries to discover more about him. The foundation investigates strange aquatic phenomenona with a sophisticated submarine called the Cetacean.

Belinda J. Montgomery co-stars as Dr. Merrill. She later portrayed Sonny Crockett's ex-wife in Miami Vice and Katherine Howser in Doogie Howser, M.D. Mark Harris looks like a not too distant cousin of comic book superheroes Aquaman and Sub-Mariner. Man from Atlantis also bears similarities with the original Star Trek series. Herbert F. Solow, creator of MFA with Mayo Simon (1), was the senior executive in charge of Star Trek, Mission: Impossible and Mannix for Lucille Ball's studio Desilu. Following the success of a pilot shown by NBC in March 1977, the network ordered three TV movies aired between May and June of the same year. Solow exec produced Man from Atlantis for his own Solow Production Company

- Man from Atlantis (Pilot): Written by Mayo Simon and directed by Lee H. Katzin (Space: 1999, Mission: Impossible). Mark Harris is confronted with the wealthy Mr. Schubert, who has lured scientists into his secret base beneath the sea. The extraordinary Victor Buono, whose résumé includes villains King Tut in the Batman 1966 series and Count Manzeppi in The Wild Wild West, steals the movie as Schubert.

- Man from Atlantis II - The Death Scouts: Penned by Robert Lewin and directed by Marc Daniels (another Star Trek veteran). Mysterious creatures possess the bodies of two scuba divers. Mark Harris is convinced they hold answers about his identity. Kenneth Tigar (Dr. Miller Simon) and Alan Fudge (C.W. Crawford) join the regular cast of the TV movies. Only the latter returned in the weekly series.

- Man from Atlantis IV - The Disappearances: Elizabeth and other scientists are kidnapped and brainwashed by Dr. Mary Smith. She uses them for a very special space project. Written by Luther Murdoch & Jerry Sohl and directed by Charles Dubin.

The Man from Atlantis one-hour series aired on NBC from September 1977 to June 1978. Victor Buono came back in five episodes. In France, the TV movies and the series arrived in 1979 on TF1 as L'homme qui venait de l'Atlantide (2). In 1980, MFA was one of the first two American dramas broadcast in China (with Garrrison's Gorillas). The 4-disc DVD set from LCJ consists in the pilot and the three TV films remastered, in French or English (with subtitles). They're enjoyable and full of familiar faces: Burr DeBenning, James B. Sikking (Hill Street Blues, Doogy Howser, M.D.), Darleen Carr (The Streets of San Francisco), Dennis Redfield (Dallas), etc. The music composed by Fred Karlin is absolutely superb.

(1) Daniel B. Rosenthal devised the format.
(2) It became L'homme de l'Atlantide for repeats.

Created by Laurent Chouchan with Michel Lengliney & Philippe Niang, comedy/drama Joséphine, ange gardien started on TF1 in 1997. It's the second oldest active series of the channel after Une famille formidable (1992). Comedian/actress Mimie Mathy stars as Joséphine Delamarre, a guardian angel sent on Earth to help people solve their problems. The series, produced by DEMD productions (Lagardère Studios) with TF1 and distributed by Lagardère Studios Distribution, celebrated its 20th anniversary in autumn 2017 with its 85th episode. The same year, Joséphine, ange gardien and Camping Paradis left the 90-minute format for the same 2 x 52-minute.

The idea of a meeting between the two hits was inspired to TF1 by the success of Magellan et Mongeville, a 2016 crossover between pubcaster France 3's detective dramas Commissaire Magellan (produced by JLA) and Mongeville. In Joséphine, ange gardien: Trois campeurs et un mariage, Joséphine, André Durieux and Xavier Proteau helped Tom Delormes to deal with the wedding of his former girlfriend. The deputy mayor in charge of the ceremony happened to be the ineffable monsieur Parizot! Written by France Corbet & Maia Muller (who write for both series) with Giacchino Campanella, this episode was directed by Camping Paradis regular helmer Philippe Proteau.

Next monday on TF1.

PREVIOUSLY ON THIS BLOG