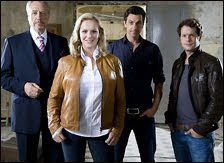 In Berlin, a team of con artists helps a group of pensioners to get their money back and targets a ruthless mob boss.

RTL didn't greenlight a series but commissioned a 90-minute second pilot, produced by Wiedemann & Berg Television, the joint venture between Endemol and producers Quirin Berg and Max Wiedemann. Written by Ulf Tschauder (GSG9) and Christoph Darnstädt (Das Experiment), and directed by Dennis Satin, Die Trixxer - note the two Xs - aired yesterday night on RTL. Reiner Schöne is back as Alouis with the other original cast members. Anja Nejarri is his daughter Maya (a former cop), Gregor Törz is Sebastian - owner of a café in Berlin which is the team's HQ, and Mirko Lang is ambitious newcomer Len. Markus Boysen, as arms dealer Brahms , and Anna Julia Kapfelsperger, as his scatterbrain daughter Buschi, are amongst the guest stars.

90 minutes is 45 too many for the uninspired result. Two Xs in the title don't save Die Trixxer from its lack of charm, rythm and characterization, in spite of the always valuable presence of Reiner Schöne. And the situations are inevitably deprived of originality. The redeeming quality of this second pilot is that it doesn't use excessively the visual and music codes of its illustrious predecessors, unlike Con Me If you Can! Though we're not spared a Mission: Impossible peel off. Holger Handtke is excellent as Brahms's henchman Melström, and Susanne Szell (Verliebt in Berlin) plays a LKA officer.

Ratings were not satisfying enough for RTL to order a series. From what we know Mickey Stone sleeps well. He even returns very soon on BBC One for the highly awaited final series of Hustle.

ADVISORY: IT WAS A (FILL THE BLANK) YEAR 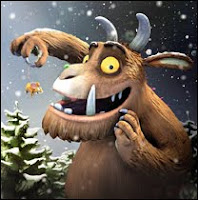 It's the end of the year and Brit telly gave us some magnicent things for this Christmas holiday, like The Gruffalo's Child and The Borrowers (definitely our favourite of the winter season). But also some good ones, like the Downton Abbey special, and unfortunately some terrible: The Royal Bodyguard and the pathetic new Absolutely Fabulous.

The jury is still out on Great Expectations and now you know our opinion about The Doctor, The Widow and The Wardrobe.
2011 was a complicated year for this little blog and your humble servant, and this december fares no better. But you're always there with your constant interest, your enduring fidelity, your support and your trust. Allow me to thank you and to wish you in advance all the best for 2012.

P.S. Yes, it's me and one of my review subjects. Why?
Publié par Thierry Attard à l'adresse 16:15 No comments: 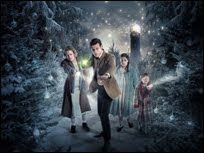 Doctor Who - The Doctor, The Widow and the Wardrobe. Yesterday BBC One aired a delightful and funny piece of mystery and suspense taking place in a snowy forest. The Gruffalo's Child was magnificent, a superb appetizer before the eagerly expected television event of this 2011 Christmas holiday: the Downton Abbey special on ITV1. In-between the Beeb aired Doctor Who.
Doctor Who is all angst for its loyal fans these days: changes in the production team, interrogation about the schedule of Series 7 and its number of episodes, what looks like communication mishaps around rumours of a movie project, etc. This after the totally unsatisfactory sixth series, with its budget arbitration and blatant writing issues. As the celebration of our favourite time lord's 50th birthday comes closer, Doctor Who Confidential has been axed, Torchwood will be remembered as a global laughing stock, and we miss the wonderful Elisabeth Sladen.

In The Doctor, The Widow and the Wardrobe, the Doctor (Matt Smith) escapes from a spaceship before its destruction, falls into space and must catch a space suit before reaching the Earth. He "gets dressed in a hurry" and crashes in 1938's England, where he's rescued by Madge Arwell (Claire Skinner). Three years later, during World War II, Madge's husband Reg (Alexander Armstrong) is presumed killed while flying his bomber home. She won't tell the news to her children, Lily (Holly Earl) and Cyril (Maurice Cole), until after Christmas, which they must all spend at their uncle Digby's house. The house has a new caretaker, the Doctor, who always pays his debts.

Sold as the "most Christmassy Christmas special ever", 2010's A Christmas Carol was in reality just plain bad: Dickens goes Top of the Pops, with Michael Gambon as Scrooge, Katherine Jenkins as herself, and Bruce from Jaws. This time, Who supremo Steven Moffat goes into C.S. Lewis's territory with a nod to The Lion, the Witch and the Wardrobe. And past the shaky and gratuitous pre-credit sequence, and the irritating scenes with Matt Smith as Willy Wonka in Bedknobs and Broomsticks, viewers can embark on a story surprisingly more faithful to the spirit of Christmas than last year's mess.

Of course most of the light of this episode seems provided by candles - like in many BBC contemporary dramas - and some sfx range from clumsy to near embarassing, but The Doctor, The Widow and the Wardrobe succeeds in delivering an average hour of family entertainment. Which is even more than what you can say of the majority of Series 6, especially after the disastrous The Wedding of River Song. Besides, unlike the previous series, the special does a proper use of its guest talents - particularly the great Bill Bailey. The Harvest Rangers of Androzani Major (hello, reference alert!) are a pure comedic treat.

Innocuous, this 2011 Christmas "special" brings nothing to the mythology but at least doesn't scorn it. A solace in these uncertain times. Oh, could have done without the Ponds.

French viewers love British detective stories and the Belgian detective sleuth gets more than decent ratings, even in repeats. Last summer TMC re-ran Poirot on afternoons with an average of 400.000 to 500.000 viewers... while pubcaster France 2 re-aired different episodes simultaneously with the same numbers! DTT saturday nights are usually ruled by The Simpsons, whose reruns are regularly followed by more than a million viewers. Last september TMC aired The Clocks, a 2009 Poirot, on a saturday night and won a #4 with 1.295.000 viewers (6.2%). Last week, Murder on the Orient Express caught 1.035.000 viewers (4.2%). The episode was immediately followed by a promo for Downton Abbey.

Both Agatha Christie's Poirot and Downton are period dramas, both are Brit and Carnival Films even produced Poirot for a while. TMC announced the arrival of Downton last september and waited the pre-Christmas holiday season to air it as a television event, but with a twist: the first four episodes yesterday night (from 8.45 pm to past midnight) (2) and the remaining three next week. In France, there's only one programme per prime time and dramas are frequently aired with two or three episodes a week - the third one being generally a rerun. Poirot is feature-length and a repeat is aired back-to-back with brand new episodes. Whereas the first series of Downton Abbey has a 1 x 65-minute premiere and 6 episodes around 48 minutes each, less advert time, but four episodes the same night is no less than force-feeding.

(1) http://www.radiotimes.com/news/2011-11-07/downton-abbey-series-two-finale-delivers-a-ratings-high-for-itv1
(2) They were repeated this afternoon.

All ratings from http://www.ozap.com/ except http://www.toutelatele.com/article.php3?id_article=37084 (In French)
Publié par Thierry Attard à l'adresse 11:03 No comments:

RETURN OF THE WOLFF

This is a very good news for fans of the long-running German crime drama Wolffs Revier: Berlin cop Hauptkommissar Andreas Wolff will be back next month in a TV movie.
Wolffs Revier ran from 1992 to 2005 on German private channel Sat.1 and concluded with a 90-minute special, Wolffs Revier: Angst, in May 2006. Created by the great scriptwriter Karl Heinz Willschrei (Tatort, Der Alte, Ein Fall für Zweï), it starred Jürgen Heinrich as Wolff. Klaus Pönitz was his partner Günther Sawatzki, later replaced by Steven Merting as Tom Borkmann. And Nadine Seiffert was Wolff's daughter Verena. The theme intro was composed by the legendary film and television composer Klaus Doldinger.

Left dead in Angst six years ago, Hauptkommisar Wolff comes back in Wolff - Kampf im Revier, which will be aired by Sat.1 on January 17, 2012. He was only heavily injured but struggles to cope with his everyday life and his job, and is addicted to drugs. Stephan Luca is Kommissar Marck and Nadeshda Brennicke is Marck's partner Vicki. Nadine Seiffert is back as Verena Wolff.

In spite of the spectacular flop of its last attempt three years ago, French private channel TF1 still wants its feuilleton quotidien. But for now only pubcaster France 3 knows how to turn lead into gold with Plus belle la vie, launched in 2004.
Laurent Storch, chairman of TF1 Production - also in charge of TF1 Films Production, as well as drama and youth programmes for TF1, has announced the filming of two pilots for a possible feuilleton français quotidien (a daily French serial). This one should be "comedic and societal" and aired in what is called in France "access prime time" (1). The genre is generally synonym of daily soap but while soap operas are culturally despised in France, le "feuilleton quotidien" remains one of the French television's wildest dreams. Why? Because of Plus belle la vie (dubbed PBLV), the local equivalent of Corrie or EastEnders.

Launched in 2004 by France 3 at the most strategic 8.20pm slot, right versus these institutions that are the 8pm news sessions of TF1 and France 2, PBLV began with lacklustre ratings. Nevertheless, France 3 believed in its investment and after hard retooling the feuilleton became one of the most watched programmes of the country, and raised appetites. Then TF1 bought Sat.1’s Verliebt in Berlin (2005-2007), the German adaptation of Columbian global phenom format Yo soy Betty la fea. And France made a triumph to the romance between Lisa Plenske and David Seidel, which became the N°1 guilty pleasure of 2007.

Public channel France 2 and TF1’s rival M6 tried to launch their own daily soaps in 2008. But Cinq soeurs and Pas de secrets entre nous, from the same production company (Marathon, producer of St Tropez), failed to attract viewers. TF1 answered with one of the most ambitious gambles of the history of French television, Seconde chance: 2700 m2 of sets at the Bry sur Marne studio facilities with 450 professionals rotating on this one site (150 alternating on the sets), 15 writers working there for a 22 minute format shot in HD, a title song performed by a former candidate of the Gallic Fame Academy, a viral marketing campaign, catchy promos and a 28 million euro budget.
TF1 cautiously tested 10 episodes with panels before ordering 180 episodes to Alma Productions, their subsidiary then behind crime drama RIS (adapted from an Italian format) and the French Law & Order Criminal Intent but also L’Hôpital, so bad it won a Gérard (the French Razzies). Seconde chance started in september 2008 and six months later ratings still didn't meet the expectations raised by costs and logistics. Axed in april 2009, it rejoined campy gems like Riviera (1991, a costly USA-France venture), Foreign Affairs (1992, a co-production between The Netherlands, Canada and... Argentina!), Secrets (1992) or Eldorado (1992-1993). However, one month before Seconde chance's demise, M6 boldly came back in the game with Paris 16ème, produced by CALT Production (Caméra Café).

CALT's effort had an estimated budget of 17 million euros, 9 sets created by a team of 70 crew members, 26 writers, 7 directors and 180 shooting days for an initial deal of 80 episodes filmed simultaneously by two production units. But Paris 16ème didn't last beyond the 80th episode, like Seconde Chance it was filled with clichés and terrible lines, and both aped American hits like Ugly Betty or Gossip Girl.