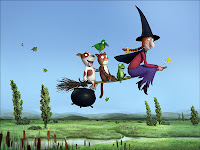 We wish we could find some time to say how much we loved Channel 4's The Fear, with the supremely talented Peter Mullan. We wish we loved Doors Open (aka "The Decaffeinated Job") on ITV1 but we'll watch Hustle again instead - they did it better. Room On the Broom, from the creative forces behind The Gruffalo and The Gruffalo's Child was, of course, wonderful.

We wish the rest of Doctor Who's seventh series willl be at least as good as The Snowmen (http://tattard2.blogspot.fr/2012/12/doctor-who-snowmen-bbc-one.html). We also wish RTL will have better things to show next year than Transporter - The Series or the pathetically bad Der Ballermann - Ein Bulle auf Mallorca (sigh). Etc, etc, etc.

Anyway, we wish you all the best for 2013 (we all need it). This month we have received Peter's Friends and series 13 of Midsomer Murders for DVD reviews.

And we'll try to open our big mouth about a few things. Hey, it's beyond our control...
Publié par Thierry Attard à l'adresse 16:50 No comments:

DOCTOR WHO: THE SNOWMEN (BBC ONE)

Retired in Victorian England, a disenchanted Doctor (Matt Smith) reluctantly teams up with his friend Silurian detective Madame Vastra (Neve McIntosh), her human partner Jenny (Catrin Stewart), and her Sontaran manservant Strax (Dan Starkey), against the snowy agenda of the sinister Doctor Simeon (Richard E. Grant). He considers having a companion again when he meets Clara (Jenna-Louise Coleman), a young woman who already investigates on her own.

In september the first half of series 7 drowned Doctor Who under its marketing "blockbuster" concept, the blatant winks to the American market, and the Pond family soap opera. After that the announcement about an "iconic" star in the 2012 special, the title sequence and theme makeovers, the new TARDIS interior, etc, etc, could only be received with a shrug of despair. « Sir, permission to express my opposition to your current apathy? »  Though sometimes Christmas miracles really happen.

Of course this special, like often with contemporary BBC drama entries, visually looks like someone didn't pay the EDF bill. Of course you have to buy the idea of a lesbian reptile detective in the Victorian era (« Good evening, I'm a lizard woman from the dawn of time. And this is my wife.» ) And to forget that certain scenes with Madame Vastra and Jenny, returning like Sontaran Strax from the calamitous A Good Man goes to War, almost shout "spinoff backdoor pilot" with a megaphone. Past that and given what preceded last autumn, The Snowmen, written by showrunner Steven Moffat himself and directed by Saul Metzstein, is surprisingly enjoyable and even fun.

You don't even need to swoon over Moffat's Sherlockian credentials or heavy nods to Conan Doyle and Holmes to taste the atmosphere of a story where Matt Smith and Jenna-Louise Coleman shine as the true Victorian sleuth duo of the episode. The way Smith can bring maturity to his portrayal of the Doctor and capture attitudes of his predecessors remains fascinating. Also it was clear that Coleman was an excellent choice for the new companion right from her role in Julian Fellowes's Titanic. And although it seems no evil race in the galaxy will be spared by the Grand Moff's sense of trivialisation, the comic relief provided by the "psychotic potato dwarf" Strax offers some of the best moments of The Snowmen.

Richard E. Grant's third visit to the Whoniverse (after The Curse of Fatal Death and Scream of the Shalka) could sound like stunt casting. But Doctor Simeon, the titular villain, concludes perfectly a month where the actor also showed all his talent alongside the great Peter Mullan in the superb The Fear. Simeon displays his cold wickedness while being himself instrumented since his childhood (young Simeon is very Damien Thorn) by a disembodied entity the Doctor previously met. This adversary is voiced by the legendary Sir Ian McKellen in a performance as brilliant as the vocal stint of Michael Sheen in The Doctor's Wife. Tom Ward (Silent Witness) guest stars as the father of two kids in a situation where The Turn of the Screw meets Sci-Fi Channel's The Invisible Man (the Ice Governess has a "quicksilver" bad trip).

« Nice name, Clara. You should definitely keep it. » Too bad Jenna-Louise Coleman's character augurs another of Steven Moffat's contrived storylines for the second half of the seventh series. Anyway this year's Christmas special is rather pleasant, the new title sequence with the revamped theme (reminiscent of the original 1963 version) is fantastic and the new TARDIS interior design is gorgeous. « How refreshing to see you taking an interest again.  » Christmas was good, now there's a birthday to celebrate.
Publié par Thierry Attard à l'adresse 21:53 No comments:

Based on the Transporter movie franchise created by Luc Besson and Robert Mark Kamen, Transporter: The Series starts today in France on private channel M6.

English actor Chris Vance (Prison Break) stars as Frank Martin - played by Jason Statham in the films - a professional freelance courier who drives a black Audi A8 and delivers mysterious packages against all odds. His rules: 1° Never change the deal. 2° No names. 3° Never open the package. Hungarian actress Andrea Osvárt plays Carla, who organizes the Transporter's missions. Paris-born François Berléand reprises his character of Inspector Tarconi from the movies. German actor Charly Hübner (The lives of others) is Dieter - Frank's mechanic and pal. The music is by Nathaniel Méchaly (Taken) and the theme is a cover from Canadian rock band Rush's Working Man arranged by Jamie Forsyth and performed by Danielle Armstrong.

The General's Daughter [in German Eine Neue Mission!] introduces the aptly cast Chris Vance with a cinematic and spectacular pre-credit sequence in the streets of Marseille (1) and a parking garage, where he gives a welcome James Bond feel to his Frank Martin. Helmed by Canadian director Stephen Williams (Lost), this premiere smartly transposes the popular movie trilogy to television. Although without the car stunts - coordinated by Michel Julienne - and the well-crafted martial art fights, choreographed by Cyril Raffaelli, the generic script written by Alexander Ruemelin with Joseph Mallozzi and Paul Mullie (the Stargate franchise) would sound like a recycled episode of the Largo Winch TV series.

But remember it's Transporter: The Series, not a Transporter 4 direct-to-DVD. Production of the big-budget series was plagued with problems: original showrunners Joseph Malozzi and Paul Mullie left over creative differences. And filming was temporary suspended after the excellent Chris Vance was hurt while shooting an action scene. The series is set majoritarily in Europe but if locations included Marseille, Nice, Berlin or Paris it was mainly filmed in Toronto and it shows. Worse, more than one third of the 12 episodes is definitely not up to the television Transporter's declared ambitions (2).

If Harvest [Vaterliebe] stays watchable with a heavy dose of indulgence (see the Audi above the tram CGI stunt), the other episodes aired by RTL don't deliver the package at all. Switch [Echt falsch] is embarassingly tedious past the enjoyable Berlin chase. Action sequences can't save the cliche-ridden Dead Drop [Plan B] and Payback [Vergeltung!] either. And Sharks [Große Haie und kleine Fische], which focuses on series regular (and M6 familiar face) Delphine Chanéac as Juliette Dubois, is just dull. Compared to those retreads of a French-Canadian co-production from the 80s or 90s Trojan Horsepower [Tod dem Fortschritt!] is barely passable. 5 episodes remain to be seen in Germany, where Transporter: The Series started well before dropping enough to lose its 8.15pm primetime slot - taken by reruns of Alarm für Cobra 11 (3).

« I don't know how to make TV shows -- I let the people who know how to do it take it on and hope they're doing their job, » said Luc Besson to THR last year. It didn't prevent him to devise and produce his first series, the successful No Limit, for TF1. The mogul is not involved in the TV Transporter and said recently that he hasn't seen it, which seems incredible as his name will be associated with it anyway. Viewers will hardly find traces of Besson's fast-paced production style in this costly effort.

(1) M6's version of this episode has a different edit.
(2) http://www.zonebourse.com/LAGARDERE-S-C-A-4668/actualite/LAGARDERE-S-C-A-Le-Transporteur-une-production-Lagardere-Entertainment-a-partir-du-6-decembre-s-15548909/
(3) RTL moved Transporter - The Series to 9.15pm. Ironically, Trojan Horsepower has a nod to Cobra 11.

[Update January 5, 2013] Apparently Canada has an intro with a different and longer edit (and singer?)