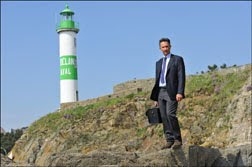 Doc Martin, the French adaptation of ITV1's ratings juggernaut, is back. Private channel TF1 aired yesterday the first two episodes of the 6 x 52-minute second series with Thierry Lhermitte (The Dinner Game) as Dr Martin Le Foll, the curmudgeonly GP of Port-Garrec.
Adapted initially by scriptwriter Eric Kristy from ITV's dramedy Doc Martin, starring Martin Clunes, the Gallic transposition is the third foreign version of the format sold by DRG (distributor of the original). Doktor Martin, starring Axel Milberg as Dr Martin Helling, ran in 2007 and 2009 on German pubcaster ZDF. In Spain, Gonzalo de Castro starred as Dr Mateo Sancristóbal in Doctor Mateo from 2009 to 2011 on Antena 3. French channel TF1 aired the first series of its Doc Martin, produced by Ego Productions, in January 2011 (with an average of 7m viewers). And since this month there's also a Greek version called Kliniki periptosi, aired on Mega.

While series one of TF1's Doc Martin succeeded in delivering an enjoyable French transplant, the second series's first couple of episodes take a number of liberties with their Brit equivalent. They swap events from an episode to another (and vice versa), alter an essential new character and try to rebalance the whole thing with "fresh" elements and transitions. They also rely very heavily on the cop character, played by comedian David Strajmayster - aka Doudi (revealed by the shortcom Samantha Oups! ) - to provide most of the comic relief.

The result is definitely uneven: the gallicization stays fun within the limits of the situations and dialogues of the original, but loses its appeal when the episodes play Meccano with the structure of the source material or walk away from it. Movie and stage actor Thierry Lhermitte remains an excellent Doc and the fictional Breton village of Port-Garrec (actually Clohars-Carnoët and the Port of Doëlan) is as magnificent as ever.

Episode one and two caught respectively 6.2m and 5.3m viewers below the first series's launch (8.9m and 8.2m).