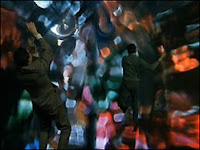 No, your humble servant hasn't been called for the conclave in Vatican City. It's just that things are a little complicated these days, to say the least.

Episode 1 of Broadchurch (ITV) was very good, yesterday's one was brilliant. Very regrettably, Shetland (BBC One) wasn't up to our expectations in spite of its great setting and the talented Douglas Henshall. Not bad, not good, not the wonderful Vera (also adapted from the books of Ann Cleeves).

Midsomer Murders returns in France at the end of this month on pubcaster France 3. We reviewed most of the 15th series when ITV aired it except the last two episodes. Didn't watch The Sicilian Defence in full as we didn't want Barnaby and Jones to investigate on our death by boredom. Compared to it, Schooled in Murder was an improvement but Jones's character exit was frustrating. And what happened at the beginning of the episode to [Spoiler], who played [Spoiler], was absolutely hilarious.

Oh, the first episode of Les petits meurtres d'Agatha Christie with the new detective duo arrives at the end of this month too, on France 2.

Thank you for your constant interest, your fidelity and your trust.