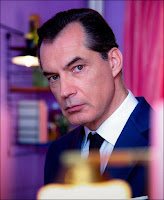 The big budget hit series will have to leave its production base of Tourcoing, in the north of France, at the end of the year because the site was sold by the municipality. Two episodes, adapted from Agatha Christie's They Came to Baghdad and Murder in Mesopotamia, will be filmed in Morocco next year. They were actually planned to be done in Turkey years ago with the Larosière/Lampion duo (which preceded the trio Laurence/Avril/Marlène) just before stars Antoine Duléry and Marius Colucci announced their departure. In the meantime the producers will find another place, near Lille, to rebuild their lavish sets.

Les petits meurtres d'Agatha Christie is produced by Sophie Révil for Escazal Films with Pictanovo (Witnesses), Conseil Régional Nord-Pas-de-Calais and the participation of France Télévisions, TV5 Monde and RTS Radio Télévision Suisse. The characters of Laurence, Avril and Marlène were created by Sylvie Simon and Thierry Debroux. The music is composed by Stéphane Moucha. You can find (advanced) reviews of the latest Petits meurtres d'Agatha Christie on this blog.