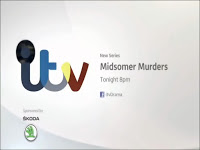 
Midsomer Murders is produced by Bentley Productions Ltd, an All3Media company, for ITV.


Series 18 reviews on this blog (Spoiler-Free):