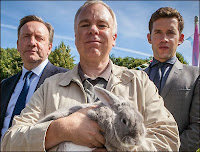 A few words about the latest episodes of those crime/detective dramas.


Lisa Holdworth caught our attention seven years ago with an episode of New Tricks. For her first gig on Midsomer Murders in 2013, a character died thanks to a giant round of cheese. Two years later she penned what was then the best episode since series 15 (A Vintage Murder). In Red In Tooth And Claw, death strikes in and around a pet show. DCI John Barnaby (Neil Dudgeon) and DS Winter (Nick Hendrix) investigate amongst an impressive number of rabbits.

There's Steve Pemberton as a champion rabbit breeder, a locum pathologist (played by Michael Obiora), and someone who plays with scissors. English acting deity Susan Hampshire graces Midsomer County with her presence. A most enjoyable episode with great lines (« It's been a bad week for small animals. First a rabbit-napping and now a dog-on-badger hate crime. »)


For some reasons which only belong to scheduling geniuses, ITV keeps the two remaining episodes of this 19th series for "later in the year". Directed by Steve Hughes. 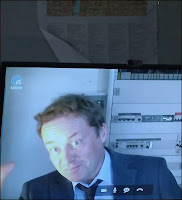 - Death in Paradise - Series 6, Episode 4 (BBC One). In which we learn what Commissioner Patterson did during his days off, and Catherine doesn't care about her election campaign.

« No solace in a kiss. No comfort in a sigh. No good about goodbye. » (Dame Shirley Bassey)

It's all boredom under the sun since the second episode of this current series. The romance between DI Goodman (Kris Marshall) and Martha Lloyd (Sally Bretton) balances between annoying and painful. Its only possible excuse (with extreme indulgence) would be to pave the way for a potential departure of Humphrey during the London two-parter or in Episode 8.

In that case, Ardal O'Hanlon, who plays "DI Jack Mooney" in Episode 5, would be my chief suspect for the replacement. Anyway, let's hope things will go back to normal (well,  the Saint Marie "normal"...) ASAP.