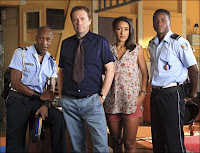 [Spoiler-free] The fiancee of a billionaire dies before her wedding and DI Mooney quickly rules out suicide. After all they're on the island of Saint Marie, the Caribbean Midsomer.

It took most of the previous series to prepare the departure of Kris Marshall/DI Goodman and his replacement by Ardal O'Hanlon as DI Jack Mooney during a two-parter mainly filmed in London. In some respects it was an improvement over the inelegant ice pick exit of the poor DI Richard Poole (Ben Miller), Goodman's predecessor. Though it was definitely at the expense of the series' dynamic, it didn't hurt the ratings because the true star of Death in Paradise is its ingenious formula: fun escapism with a fish out of water sleuth in the Caribbean.

Death in Paradise has a worldwide audience so the new Detective Inspector was undoubtedly choosen with great care. As expected, Ardal O'Hanlon did a nice job right from his first appearance and Series 7 is all DI Mooney's, which is better for everybody including viewers. Joséphine Jobert (DS Florence Cassell), Danny John-Jules (Officer Dwayne Myers), Tobi Bakare (Officer J.P. Hooper), Élizabeth Bourgine (Catherine Bordey) and Don Warrington (Commissioner Selwyn Patterson) also return. Written by series creator Robert Thorogood, the premiere of this new 8-episode series brings back Death in Paradise in good shape.

The family and friends of the wealthy Philip Marston (Denis Lawson) are together in Saint Marie before his wedding with Diane Smith (Elizabeth Berrington). During a party, Marston receives a text message from the bride, who then falls from a balcony. DI Mooney and his team are called by Commissioner Patterson himself because "Philip is an old friend of Saint Marie" who employs about 100 islanders. As often, the commissioner wants the matter to be handled with "speed, discretion, tact and dignity". Mooney reassures his boss that discretion, tact and dignity are his middle names (actually his middle name is Fintan).

The fact that Diane only painted one fingernail before dying and a "slight limbo related injury" complicate the investigation. Meanwhile, Dwayne has a problem called Audrey (Doreene Blackstock). The episode is centered on Jack and the comedy duo Dwayne/J.P. Like Selwyn, Catherine has nothing much to do. Florence runs a lot and Jack's daughter Siobhan (Grace Stone) leaves the island for university. Stefano Braschi, Rob Heaps, Tanya Reynolds and Jemima Rooper are the other happy winners of a trip to Guadeloupe for this episode directed by Jonathan Gershfield. Death in Paradise is produced by Red Planet Pictures for the BBC.