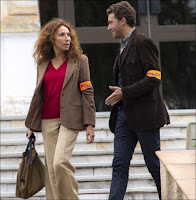 French pubcaster France 3's detective drama Crimes parfaits is a "semi-anthology" where a murderer known from the start thinks he/she has committed the perfect crime but a detective (different in every couple of episodes) proves him/her wrong.

It's the concept of the inverted detective story, popularized by Columbo though created in literature many years before the famous lieutenant. These two new episodes are directed by Emmanuel Rigaut (Le prix de la vérité, Mongeville et Magellan: Un amour de jeunesse).

Isabel Otero plays Police commander Claire Moreno in Étoile filante and Le grand saut, from prodco GMT Productions. It's almost a comfort that the third and last female detective of this second series of Crimes parfaits is not another copycat of Capitaine Marleau, France 3's ratings juggernaut. GMT made Diane, femme flic (2003-2010) for TF1 and it starred... Isabel Otero. They were also behind another crime drama hit of the private channel: Julie Lescaut (1992-2014). In 2002, Isabel Otero took the lead role in the long-running France 2 series La Crim' (1999-2006).

Claire Moreno has a teenage son, an addiction for chocolate bars and a deputy named Hubert, played  by Hubert Roulleau (Les chatouilles, Mongeville et Magellan: Un amour de jeunesse). His look and his car are definitely nods to The Mentalist. Isabelle Polin and Frédéric J. Lozet, who penned the third episode of Series 1 (Aux abois, starring Antoine Duléry as Renaud Delaunay), wrote Étoile filante. Bruno Solo (Blood on the Docks) is brilliant as David Pasquier, a double-star chef and restaurant owner who follows a most machiavellian plan to murder his wife Élise and frame his stepbrother.

Moreno suspects Pasquier a bit too easily and the episode is heavy on cooking metaphors. Also starring Arsène Jiroyan (Léopold, the pathologist), Vanessa Liautey (Patricia), Charles Clément (Le prix de la vérité) as Pascal, etc. Franck Sémonin (Section de recherches) plays Alain Saunier, the coach of France women's heptathlon team, in Le grand saut. When Saunier understands that Laura, an athlete and his lover, will get his job for the 2024 Olympic Games he strikes the federation delegate to death. Alain is way less subtle than his restaurateur predecessor and his crime is a bit cartoonesque.