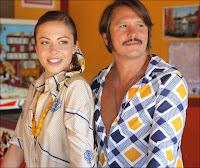 Tom Delormes, who owns the Camping Paradis, travels back in time to the year 1976.

Launched in 2006, Camping Paradis was created by Michel Alexandre, Ludovic Pion-Dumas & Anne Badel. Produced by JLA Productions with TF1, this comedy series is centered on the everyday life and problems of Tom Delormes, a campsite owner, and his team. Regular cast members since the beginning are Laurent Ournac (Tom), Thierry Heckendorn (André Durieux) and Patrick Guérineau (Xavier Proteau). Humorist Candiie plays Audrey Dukor since season 8. Patrick Paroux (Around the world in 80 days, Amelie) recurs as Christian Parizot, the most faithful client of the Camping Paradis.

In 2017, Camping Paradis celebrated its 50th episode and left the 90-minute format for the same 2 x 52-minute as TF1's long-running comedy/drama Joséphine, ange gardien. The characters of the two hits of the channel met last year in an episode of each series. Cette année-là is the second episode of Camping Paradis directed by Laurent Ournac. It was penned by Laurent Mondy (Le prix de la loyauté, Commissaire Magellan), who wrote several other episodes and co-wrote its side of the crossover.

Tom Delormes considers selling the campsite, which André doesn't approve. He's about to meet the buyers when he accidentally bumps his head and faints. When Tom awakes, the Camping Paradis looks a bit different: France is struck by a heat wave, Jacques Chirac is Prime Minister (not for long) and Claude François sings Cette année-là. Delormes tries to use his cell phone but he can't because he's now in July 1976! The camping is called Chez Patrick ("C'est magnifique!") and it belongs to Patrick Delormes, Tom's father.

Patrick wants to sell his property to banker Aymeric Flambrin but the latter needs Marie Tourvel, his accountant, to audit Chez Patrick before the transaction. Marie happens to be the future mother of Tom Delormes. Tom tries to tell a much younger André Durieux what happened to him but the only one who believes him is Monsieur Parizot. Not Christian but his father Jacques Parizot (Patrick Paroux), a physics teacher from Colmar and a kind of zany inventor. Tom thinks that his "mission" is to prevent the sale in order that Marie falls in love with Patrick.

Tom Delormes meets the other members of Patrick's team: Javier, the womanizing bartender (Patrick Guérineau), and Odile (Candiie). Serge Lefebvre, a miner from the North of France, his wife Françoise and their son Danny arrive for the holidays. Their presence is an opportunity for Tom to teach his father the spirit of empathy that will become the trademark of the place. Marie is baffled by Patrick's bad management. Tom must queue up in front of a phone booth and Parizot wants to electrocute him to send him back in 2019.

Usually reminiscent of The Love Boat, Camping Paradis goes full Joséphine, ange gardien in the quite enjoyable and often funny Cette année-là. Patrick Paroux is fabulous as a Parizotesque version of Doc from Back to the future. There are no huge special effects but an artistic work made to give the episode a 1970s flavour. Starting from a very special title sequence (Camping Paradis 1976) which nods to the three-way split screen of Dallas (1). The 1980s aren't forgotten with the Tom Selleck/Magnum, P.I. look of "Javier".

(1) The car of Aymeric is another nod to Dallas.