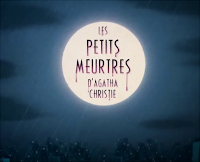 Rendez-vous avec la mort is adapted from Agatha Christie's novel Appointment with Death by scriptwriter Sylvie Simon. Commissaire divisionnaire Ernest Tricard thanks his colleagues and friends for their presence at the funeral of his mother when Clémence Berg, his sister, arrives from French Guiana to settle in the derelict hotel which belonged to the deceased. This tyrannic widow, hated by her relatives and her servant, quickly gets interested in Commissaire Laurence.

Melie Lacour, the servant, is murdered because she stole the clothes of her mistress and was mistaken for her. Swan sends Alice undercover at the Hôtel du nord. Rendez-vous avec la mort is one of the best episodes of Les petits meurtres d'Agatha Christie. The plot combines perfectly the spirit of the work of the English crime writer with this sense of comedy, typical of the series, which reminds of the best plays of Au théâtre ce soir (1). Sylvie Simon gives us a fireworks show of brilliant dialogues and hilarious situations.

The main cast looks like they have a lot of fun, particularly Blandine Bellavoir in a yellow bathing cap and Samuel Labarthe with the dog. Dominique Thomas, the beloved Tricard, and Marie Berto (Arlette Carmouille), form a great duo. The guest cast is excellent, starting with Mireille Herbstmeyer as Clémence. She can now be seen in Marianne, the Netflix Horror series. Franco-British actor Tom Hudson, who plays Louis Berg, is the son of Peter Hudson, who played Docteur Masson in Versailles (2015-2018) and James Horton in Highlander: The series (1992-1998).

The strange residents of the hotel have a little something of The Addams Family, especially the young Suzanne Berg (Juliette Pedevilla-Defaÿ, very Wednesday Addams) and Roger Bessan (Olivier Carré). The latter evokes Lurch, the manservant to the Addams, but also Baptiste from the episode Un meurtre est-il facile?. There are nods to some other Petits meutres as well. Also with Cyril Gueï (Tim Glissant), Guillaume Bouchède (Philippe Berg), Clémence Aubry (Caroline Berg), Stéphane Pézerat (Raoul Neuville), Stéphanie Petit (Melie Lacour) and Bubulle & Marcel.