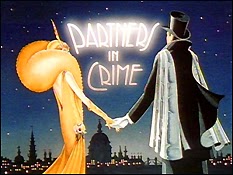 But now the BBC announces they have struck a deal with the author's estate making the corporation the new home of Agatha Christie in the UK for the 125th anniversary of her birth.

The first two commissions of this new era for Christie on British telly are an adaptation of And Then There Were None by Sarah Phelps (Great Expectations), and Partners in Crime. Based on the Partners in Crime collection of short stories featuring crime-fighting duo Tommy and Tuppence Beresford, this new six-part series will be set in the 1950s and will star comedian and actor David Walliams as Tommy. The new Tuppence is still to be confirmed.

Francesca Annis and James Warwick played the Beresfords in Agatha Christie's Partners in Crime, a 1983-1984 series for LWT. In France, the sleuth couple has its comedy movie franchise starring André Dussollier and Catherine Frot as Bélisaire and Prudence Beresford. The French are particularly fond of Agatha Christie's work with pubcaster France 2's Les petits meurtres d'Agatha Christie, a TV series adaptation of her books set in France in the 1930s and later in the 1950s.

Email ThisBlogThis!Share to TwitterShare to FacebookShare to Pinterest
Libellés : Agatha Christie, And Then There Were None, BBC, ITV, Les petits meurtres, Marple, Partners in Crime, Poirot