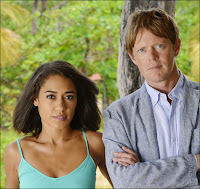 [Spoiler-Free] A weak, forgettable episode. Maybe we needed some rest after two weeks of absolute brilliance.

Zoe Mackay, a young model, is strangled during a fashion show of designer Nelson Benedict at the Paradise Beach Hotel. Why was she holding a stocking?

DI Goodman (Kris Marshall) asks Florence (Joséphine Jobert) for some advices on meeting women. Dwayne (Danny John-Jules) wears cologne and J.P. (Tobi Bakare) went to school with one of the models, Rosey Fabrice. Humphrey tries to tell a joke about a pterodactyl to Catherine (Élizabeth Bourgine).

This week's happy winners of a trip to Guadeloupe (aka "The guest cast") are Jason Barnett, Hannah Britland, Fola Evans-Akingbola, Elarica Johnson, Paul Nicholls and Heida Reed. Death in Paradise is produced by Red Planet Pictures for the BBC. Yvonne Francas is the producer.

Series creator Robert Thorogood is the co-executive producer. Tony Jordan and Tim Key exec produce. Musique composed by Magnus Fiennes. Produced with the support of the Region of Guadeloupe and Film Commission of Guadeloupe. Episode written by Tom Higgins and directed by Audrey Cooke.