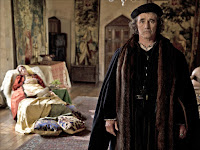 Wolf Hall, the acclaimed six-part BBC drama based on Hilary Mantel’s historical novels Wolf Hall and Bring Up the Bodies, arrives this thursday in France and Germany on Franco-German channel Arte.

Adapted by playwright and scriptwriter Peter Straughan (Tinker, Tailor, Soldier, Spy), Wolf Hall is directed by Peter Kosminsky (The Promise). The cast (over 100 characters) is headed by Mark Rylance (The Other Boleyn Girl) and Damian Lewis (Homeland).

Wolf Hall is co-produced by Company Pictures and the US company Playground Entertainment (The White Queen, Dancing On The Edge) for the BBC and Masterpiece, in association with BBC Worldwide, Altus Media and Prescience. It is without a doubt a great piece of television. Except that Arte will show it in two weeks instead of six: three episodes this week and three episodes on thursday 28! Which is highly regrettable.

You can find our 2015 review of the first episode here: