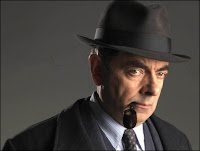 ITV has confirmed that Maigret Sets A Trap, the first of the channel's two new TV movies with Rowan Atkinson as Maigret, will be aired on Monday, March 28, 2016.

Created by Belgian author Georges Simenon, Commissaire Jules Maigret appeared in 75 novels and 28 short stories published between 1931 and 1972. Popular worldwide, these stories have been adapted many times in various countries, essentially for the cinema (with Pierre Renoir, Albert Préjean, Jean Gabin, etc...) and television.

From 1960 to 1963, Rupert Davies starred as "Inspector Maigret" in Maigret for the BBC. On French TV, Les enquêtes du commissaire Maigret, starring Jean Richard, ran from 1967 to 1990 with 88 episodes until pubcaster Antenne 2 decided to give its familiar figure the axe. Though with the intention to give him a fresh start as Richard was then 70. Then, English producer Steve Hawes and French producers Eve Vercel and Robert Nador (of Dune Production), devised its successor: Maigret.

Movie, stage and TV actor Bruno Cremer accepted the iconic role after due reflection. To radically differ from the previous version, the producers decided to set theirs in the Fifties with a cinematic feel, hence a budget that required co-production with Swiss and Belgian televisions, French private channel La 5 and EC Télévision Paris. But also filming in Switzerland, Belgium, Czech Republic (which became an essential production partner) or Finland. Even South Africa and Cuba for some later entries.

Bruno Cremer played the commissaire in 54 episodes from 1991 to 2005. Sadly, he had to be dubbed by Vincent Grass in the finale episode (Maigret et l'Étoile du nord) because of some health issues. Cremer died in 2010 and his Maigret is still considered as the definitive adaptation of Simenon's character. Meanwhile in the United Kingdom, Granada aired its own Maigret (with Michael Gambon) from 1992 to 1993. BBC Four shortly aired the Bruno Cremer series in 2008. And last year, ITV announced the return of Jules Maigret to British TV with two films for television starring English comedian and actor Rowan Atkinson.

In France, where Maigret is sacred, the initial reaction was "Mr Bean to play Maigret", regardless of the fact that Jean Richard, who performed the role for 23 years, was mainly known as a "funnyman" before his TV series. Actually the most regrettable thing with the choice of Atkinson is that ITV had the ideal Jules Maigret on hand with Roger Allam, who plays DI Fred Thursday in Endeavour since 2012. Maigret Sets A Trap is adapted from Maigret tend un piège by Stewart Harcourt (Agatha Raisin, Agatha Christie's Marple) and directed by Ashley Pearce. Harcourt also adapted the second TV movie, Maigret's Dead Man (from Maigret et son mort), directed by Jon East.

Set in the 1950’s in Paris, and filmed in Budapest, those two new Maigret are produced by Ealing Studios and Maigret Productions Ltd (a Peters Fraser Dunlop Group company). Maigret is distributed by BBC Worldwide and France 3 will air it in France. It's the French home of Midsomer Murders, Endeavour, Vera, etc. The ITV recent video promotional material seems to indicate that the legacy of the Bruno Cremer version will remain intact. His Maigret is available in France on DVD from Koba Films.