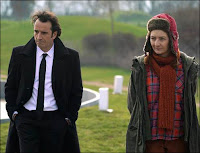 [Spoiler-Free] Someone is murdered at a luxury thalassotherapy hotel and spa owned by Luc and Milena Férey. Capitaine Marleau (of the Gendamerie) investigates. Marin Cibié, a homeless young man, is arrested but she's rapidly convinced of his innocence.

Choreographer Garance Thibaut, who lives at the establishment and had an argument with the victim before his death, is amongst the suspects.

Superbly directed by series helmer and producer Josée Dayan, Brouillard en thalasso is the fourth episode of France 3's crime drama Capitaine Marleau. It's the second episode written by Stéphan Guérin-Tillié after Les mystères de la foi. The great dialogues include the usual humour but also social and political references: the state of emergency, the protesters of République, DSK, etc. Played brilliantly by Corinne Masiero, Marleau (no first name) tries thalassotherapy while keeping an eye on her suspects. The colourful capitaine helps the young Marin, whose situation echoes her own past. She's assisted by Brigadier Brière and Michel, an old unemployed computer expert (1).

Derouault is behind the choreography of the dance scenes, in which the dancers from the Théâtre du Corps Pietragalla-Derouault participate. Brouillard en thalasso is the best episode since Capitaine Marleau: Philippe Muir, the pilot. The series, created by novelist and scriptwriter Elsa Marpeau, is produced by Josée Dayan's company Passionfilms and Gaspard & Co with To Do Today Productions, R.T.B.F. (Télévision belge), RTS Radio Télévision Suisse and France Télévisions.  Produced by Josée Dayan and Gaspard de Chavagnac. François Bennaceur is the associate producer. Music by Catherine Lara and Cyrille Lehn.

Stefan Ivanov is the cinematographer and Yves Langlois is the editor. Brouillard en Thalasso was filmed in March 2016 in Alsace, mainly at the hôtel casino Barrière of Ribeauvillé. Produced with the support of Strasbourg Eurométropole and Région Alsace Champagne-Ardenne Lorraine. Production moved to Tournan-en-Brie, in the Région Île-de-France for the fifth Marleau, which guest stars Pierre Arditi (Blood of the Vine) and Aure Atika (The Night Manager). Brouillard en Thalasso, aired yesterday on Swiss channel RTS Deux, will be shown next tuesday on France 3.