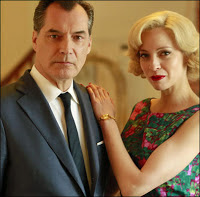 [Spoiler-Free] In which Swan Laurence worries about a decline. And it's not the quality of the episode.

Émilie Beauregard, 60, owns the luxurious Styles beauty institute. She's married to the much younger Adrien Sauvignac, a masseur. Journalist Martial Marchetti arrives at the establishment and Sauvignac immediately catches his attention. Ève Constantin, Émilie Beauregard's business partner, tells Commissaire Laurence that she fears the young man wants to get rid of Émilie for her fortune but Swan ignores her. In fact, Laurence has a very personal concern as he doesn't take his birthday well.

Marlène and reporter Alice Avril go to Styles, where Émilie Beauregard mistakes them for a lesbian couple. Later, Marlène finds Marchetti dead in the bottom of the pool of the institute. Laurence investigates and meets Diane Clément-Roussel, a customer of Styles. Meanwhile Alice finds... her mother. What goes up must come down, they say: Les petits meurtres d'Agatha Christie returned on August 26 on French pubcaster France 2 with the brilliant L'étrange enlèvement du petit Bruno. Then it regrettably started to lose steam with Le cheval pâle. The following week things got worse with L'affaire Protheroe.

Directed by Éric Woreth, La mystérieuse affaire de Styles is adapted from Agatha Christie's novel The Mysterious Affair at Styles by Pierre Linhart. In this catastrophe, the dynamic trio Laurence/Avril/Marlène is neither dynamic (weariness shows) nor a trio. Laurence (Samuel Labarthe) has not one but two embarrassing moments plus a couple of terrible lines. Since last week a photo of Avril (Blandine Bellavoir) illustrates the definition of "Pathos" in the dictionary. At some point you see a soap opera development coming but you hope they won't dare. Unfortunately they do. Marlène (Élodie Frenck) tries hard to bear the burden of comic relief alone.

This year the pathologist of the commissariat seems to be the equivalent of the secretary in Murphy Brown (though the new one is an improvement over Dr. Everest). About the commissariat, fans noticed that it looks different. Actually the big budget hit series had to leave its production base in Tourcoing because the site was sold by the municipality. Thankfully another place was found in the same town at the beginning of 2016. Frédérique Tirmont (Émilie Beauregard), Sophie Cattani (Ève Constantin), Alexia Barlier (Diane Clément-Roussel), Andy Gillet (Adrien Sauvignac), Charlie Joirkin (Dorothée Mellul) and Frédéric Fisbach (Professor Hoffman) are amongst the guest stars of this episode.

Cyril Gueï plays the pathologist (of the week?) Timothée Glissant. Dominique Thomas is Tricard. Les petits meurtres d'Agatha Christie is produced by Sophie Révil for Escazal Films. France Télévisions is now co-producer. With the support of Pictanovo and Région Hauts-de-France. Also with the participation of TV5 Monde and RTS Radio Télévision Suisse.  Main characters created by Sylvie Simon and Thierry Debroux. The music is composed by Stéphane Moucha. The Styles institute is in fact the Najeti Hôtel Château at Tilques (Pas-de-Calais). In terms of ratings, Les petits meurtres is more popular than ever. La mystérieuse affaire de Styles caught 4.553.000 viewers (19.1%) and ranked #2 against the French version of Survivor on TF1.