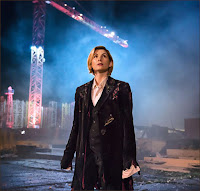 Special thanks to Nicole Loutan.

It's a new world. With new enemies. And new threats. But you can still depend on one man woman.

Written by new Doctor Who supremo Chris Chibnall (Broadchurch, Torchwood) and helmed by Jamie Childs, The Woman Who Fell to Earth takes place soon after the latest regeneration of the Doctor from a "white-haired Scotsman" (Peter Capaldi) to... Jodie Whittaker. The gender swap sparked a frantic debate when the casting of this talented English actress, who worked with Chibnall on Broadchurch, was announced. Even if fans were prepared to the idea with Missy (Michelle Gomez), the Mary Poppinesque regeneration of the Master previously played by John Simm.

Before that, The Doctor's Wife (Series 6, Episode 4) stated that Time Lords could change genders. The legendary Joanna Lumley was briefly the character in the non-canonical Doctor Who: The Curse of The Fatal Death (1999) for Comic Relief. Regardless of the heated comments about the gender question, the star of Doctor Who has never been a problem. The role of the Doctor is always cast with utmost care. Jodie Whittaker was great right from her short appearance at the end of Twice Upon a Time, the 2017 Christmas special. Unsurprisingly, The Woman Who Fell to Earth confirms that she was aptly chosen.

Weird events occur in Sheffield and its surroundings. Ryan Sinclair (Tosin Cole), a young man who suffers from dyspraxia, involuntarily triggered them. Police officer Yasmin "Yaz" Khan (Mandip Gill), Ryan's gran Grace O'Brien (Sharon D. Clarke) and her second husband Graham (Bradley Walsh) are also involved. Torchwood being unavailable, the Doctor literally drops by to help against a cousin of the Predator named Tim Shaw... sorry, T'zim Sha. The Woman Who Fell to Earth is quite chatty (to fill 63 minutes) and very nocturnal but it's an enjoyable series premiere, reminiscent of the 1996 TV movie. Whatever Chris Chibnall's motives, the absence of intro is most regrettable. That's like no Gunbarrel in a James Bond.

Bradley Walsh is a fantastic addition to Doctor Who. What happens to one of the Doctor's new friends is unfortunate in many respects. The new version of the iconic theme by composer Segun Akinola is excellent. French pubcaster France 4 airs Series 11 on Thursdays with subtitles, only four days after BBC One. This tour de force is impressive, especially when you remember that French fans of the classic series weren't so lucky (1). Also starring Samuel Oatley (Tim Shaw), Jonny Dixon (Karl), Amit Shah (Rahul), etc. Produced by BBC Studios Cymru Wales. Nikki Wilson is the series producer. Matt Strevens and Chris Chibnall exec produce. French subtitles by Blandine Ménard (Game of Thrones) for Dubbing Brothers.

(1) See the very interesting article by Alain Carrazé in Doctor Who Magazine Special: The World of Doctor Who.