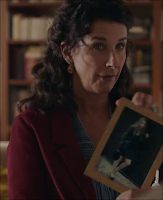 In Crimes parfaits, a murderer known from the start thinks he/she has committed the perfect crime until a detective (different in every couple of episodes) proves him/her wrong. It's the concept of the inverted detective story, popularized by Columbo though created in literature many years before the famous lieutenant.

French pubcaster France 3's detective "semi-anthology" Crimes parfaits continues with the return of a familiar captain... No, not that one.

France 3 is the home of Capitaine Marleau, the megahit created by Elsa Marpeau and starring Corinne Masiero as an offbeat, sharp-minded and quick-witted sleuth without a first name but with a chapka and a parka. Columbo is one of the acknowledged influences of the character. Coincidentally (or not), some cousins to the eccentric female sleuth regularly pop up on the channel. Julie Depardieu stars as a free-spirited and whimsical pathologist in Alexandra Ehle, a series written by its creator... Elsa Marpeau. Before that, Crimes parfaits was launched in 2017 with a couple of episodes starring Isabelle Gélinas as Agnès (no last name), an unconventional police captain dressed like Janis Joplin.

Christine Citti, an actress well known to French crime drama fans (Les enquêtes d'Éloïse Rome, P.J.), guest stars as Sylvaine Dumont in C'est la taille qui compte. Back from Paris, Sylvaine discovers that her husband has committed suicide. She decides to make it look like a murder in order to frame Lucie Perrin (Lola Dewaere), their neighbour and his mistress. Poor Thibaud must find his boss on a nude beach. He conducts the investigation with her blessing and soon Lucie is under arrest. The presence of Christine Citti turns out to be a missed opportunity. The comedy situations are contrived and the ending epitomizes the pointlessness of this episode. Also with Sophia Johnson (Bleue).