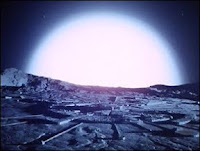 Doctor Who - The Wedding of River Song (Series Six, Episode Thirteen). Written by Steven Moffat and directed by Jeremy Webb.
On the 13th of September 1999 the Moon didn't leave Earth's orbit - or someone would surely have noticed. And on the 22nd of April 2011 nothing happened either.
« If God had a name what would it be?
And would you call it to his face?
If you were faced with him
In all his glory
What would you ask if you had just one question? »
(Joan Osborne - One Of Us)

One day... No one dies. And London goes nuts. The sky looks like a Ford Mondeo advert, parks go Primeval, Charles Dickens (Simon Callow) is asked about his Christmas special on BBC Breakfast, and Bert Large - or is it Winston Churchill? (Ian McNeice) - is the Holy Roman Emperor. It's always two minutes past five in the afternoon and Silurian doctor Malokeh (Richard Hope), Caesar's personal medic, sees nothing wrong with that. Something has happened to time and the Doctor (Matt Smith) does the "It's" man from Monty Python's Flying Circus. Why can't he just be a good boy and die on this 22nd of April? Because of a woman, says our favourite time lord although we can suspect there's far more behind this mess than "hell in high heels".

« This is absurd. Other worlds, carnivorous skulls. Talking heads. I don't know why I'm listening to you. » (Emperor Bert Large)

The Doctor "marries" River Song (Alex Kingston), the daughter of Amy Pond agent of S.H.I.E.L.D. (Karen Gillan), and cheats death by pulling a Meet Dave in the finale of Doctor Who's sixth series. There's a Dalek... Oops, sorry! There was. There's also a viking who dies in an 80s Italian horror movie, Dorium Maldovar (Simon Fisher-Becker) as Alfredo Garcia, trains, pyramids, Rory Williams (Arthur Darvill) as ARC's Captain Becker. And poor Frances Barber covering for Joan Collins as the queen of panto villains Madame Kovarian - whose only goal in life just to p**s off everyone. Oh, almost forgot Meredith Vieira (Hello, lovely American viewers!) and Roger from American Dad plus some pals all dressed to kill for the occasion.

Another series of Steven Moffat's big Timey-Wimey scheme is finished and aspirins will not be included in the DVD boxset. Series six was uneven, often talkative, looking overinvested in terms of production values at some points and the contrary at some others. « Budget cuts are tough: I don't like them, but they force you to be creative, » said the Great Moff in 2010. And budget arbitration forces you to manage. Who cares anyway? Most fans love Moffat's Doctor Who and the work of his fellow writers is unreservedly hailed as genius. Rating panels love it too and so does the American market (Matt Smith was again a guest on Craig Ferguson's show this monday). And BBC Worldwide adores it (the brand is commercially at the top globally).

« Those reports of the sun spots and the solar flares. They're wrong. They're aren't any. It's not the sun. It's you. The sky is full of a million million voices, saying, "Yes of course. We'll help." » And yeah, yeah, God is great. Yeah, yeah, God is good, says the song. In an aborted timeline, in a world that never was, nothing happened. The Brigadier is gone; Goodbye, Sarah Jane Smith; Torchwood has become a global laughing stock. « On the Fields of Trensimore, on the Fall of the Eleventh, when no living creature can speak falsely or fail to answer, a question will be asked. A question that must never ever be answered. »