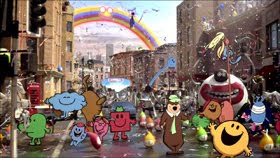 The advert for yogurt brand Müller's Wünderful Stuff, their new advertising UK campaign, is the coolest animation-related thing since Peter Kay's Animated All Star Band.
The new 90-second ad, aired for the first time last saturday during The X Factor on ITV1, is from the TBWA\London advertising agency. It stars KITT from the 80s Knight Rider series, Yogi Bear, some Mr Men characters, Muttley - the dog from Hanna-Barbera's Dastardly and Muttley in their Flying Machines, a robot, unicorns, and some severe employees who look like they work for the banking or finance sector. Oh, there's a ant too.

This amazing commercial, central to a £20m integrated advertising campaign, is directed by Antoine Bardou-Jacquet. It mixes live-action, traditional hand-drawn 2D and digital 3D animation. Partizan Lab is the production company and The Mill (Doctor Who) is behind the post-production. The superb epic piece of music is composed by Guy Farley.