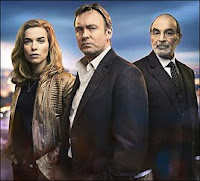 Hidden started last thursday. This four-part conspiracy thriller brings back Philip Glenister to BBC One after Ashes to Ashes and Life on Mars, where he played of course Gene Hunt.
"Original British Drama", the BBC tagline, is hackneyed these days. Even the laughable Torchwood: Miracle Day was introduced as such in a promo. Directed by Niall MacCormick, Hidden is written by Northern Irish novelist and screenwriter Ronan Bennett (Public Enemies, Face) and was created by Bennett with veteran American screenwriter Walter Bernstein (The Magnificent Seven, The Money Trap, Fail Safe). Strictly on paper it appears like another thriller about a jurist, journo or politician with a shadowy past who unveils a conspiracy. But the premiere has enough qualities to make viewers spend a good hour of television and wish for more.

Harry Venn (Glenister), a small-time solicitor, is approached by the mysterious Gina Hawkes (Thekla Reuten). She claims to be a lawyer and wants his help finding an alibi witness for one of her clients. As London - actually Belfast! - is torn by riots and a crisis in Westminster, the job forces Harry to delve into his murky past. The writers succeed in creating an atmosphere of film noir and Philip Glenister finds the right tone as a chandleresque anti-hero. A flawed but likeable character, sleepwalking into his chaotic personal life and career, womanizing and coke-snorting until he meets the quintessential femme fatale.

Less convincing in this first episode is the political subplot, mainly seen through news bulletins (Adam Boulton, Nina Hossain and Kirsty Wark appear as themselves). Too many elements are squeezed into 58 minutes of a four-episode drama which looks like it would have needed two more hours. And the Beeb is making the conspiracy thriller genre commonplace, chasing the glorious memory of State of Play. Amusingly Glenister played a cop facing John Simm in the six-part 2003 serial written by Paul Abbott.

Anna Chancellor, Richard Dormer, Peter Guinness, Matthew Marsh and Thomas Craig are among the cast. Hidden is produced by Origin Pictures (The Crimson Petal and the White) for BBC Northern Ireland. Christopher Hall produces, David M. Thompson and Ed Rubin exec produce, and Stephen Wright is executive producer for the BBC. Jan Jonaeus (Identity) is the director of photography and Rob Lane is the composer.

For now Harry Venn and his troubled world are more interesting than the baguette and the predictable explosion. But Hidden seems rather compelling and in the next episode the great David Suchet arrives as Sir Nigel Fountain (!) There's undoubtedly far more than a Gene Genie in Philip Glenister, and Thekla Reuten is excellent.