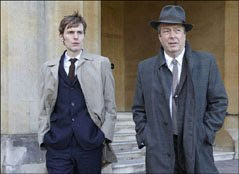 1965, in a Midlands town. Young Detective Constable Endeavour Morse is writing his letter of resignation from the police force but the case of a missing schoolgirl brings him back to Oxford.
Endeavour, the two-hour prequel to the long-running Inspector Morse series (thirty-three episodes from 1987 to 2000), marks the 25th anniversary of the very first episode of the popular crime drama starring the beloved John Thaw as the novelist Colin Dexter's creation. Kevin Whately, who co-starred as his sidekick Robbie Lewis, has his own spin-off since 2006 with Lewis - known as Inspector Lewis in the US. Shaun Evans (Teachers, Martina Cole's The Take) has the daunting task to play a younger version of the iconic role in this one-off drama aired yesterday night on ITV1.

Endeavour has the necessary blessing of Colin Dexter, who first wrote a short story with young Morse for the Daily Mail in 2008, and appears in his traditional cameo. The script takes a host of precautions to conquer fans with astute references and nods cleverly brought, starting with the car - not yet burgundy. It's penned by Russell Lewis, whose work on Morse, Kavanagh QC (with John Thaw) and Lewis confers him an indisputable legitimacy, and it confronts the disillusioned young copper to apparently respectable members of the Oxford community with their weaknesses and passions.

Lewis and director Colm McCarthy (Injustice) succeed with the re-creation of the familiar environment from the Inspector Morse and Lewis dramas. But as good as Shaun Evans is in capturing manners and attitudes of the character, it takes time to get used to the idea that this Doctor Who-ish young man is the same Morse we all knew. And Endeavour is essentially the sidekick of DI Fred Thursday, played by the talented Roger Allam who steals the episode in the role of Morse's mentor. He already deserves a spin-off series as the missing link between Maigret and Gene Hunt.

Guest stars include James Bradshaw as a younger Dr Max DeBryn (1), the excellent Patrick Malahide, and Charlie Creed-Miles who shined last summer in Injustice. With 6.8m viewers and a 28% share (ITV+1 included), a subsequent series could easily follow what was announced initially as a one-off. Although the young Endeavour Morse will of course have to be very rapidly less mousy to be really interesting. The paradoxical challenge of Endeavour is to find its own style in the shadow of the portrayal of Morse by the great John Thaw.

Like in Morse and Lewis, the sublime music of Barrington Pheloung is a character in its own right. Endeavour is a co-production of Mammoth Screen and Masterpiece in association with ITV Studios.