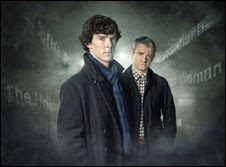 Sherlock - A Scandal in Belgravia (Series Two, Episode One). Sherlock and John are summoned by the highest authorities for a very delicate case involving Irene Adler, a shadowy character who has the power to compromise a very important personality.

Sherlock, the BBC 2010 hit from Doctor Who supremo Steven Moffat and actor/scriptwriter Mark Gatiss, is back since yesterday on BBC One for a second 3 X 90-minute series. This modern take on the Sherlock Holmes novels by Sir Arthur Conan Doyle was launched during summer 2010 with impressive ratings, a warm reception from the public, and a concert of critic praises celebrating Moffat and Gatiss's "re-imagining". Benedict Cumberbatch and Martin Freeman return as Sherlock Holmes and his friend Dr John Watson, as they were left in the swimming pool cliffhanger of The Great Game, facing the nefarious Jim Moriarty (Andrew Scott).

Hailed as the second best thing since the invention of running water, the first series of Sherlock was a glorified British answer to The Mentalist. You had to come back from Gilligan's Island and have been deprived of the gazillion repeats of Monk to buy without a smile Sherlock's « I'm a consulting detective. I'm the only one in the world. I invented the job. » You had also to taste the on-screen text and graphics showing phone messages and even morphing Sherlock's deduction into an advert for a credit card. A Scandal in Belgravia premieres the new series as an update by Moffat himself of A Scandal in Bohemia and its central character, Irene Adler, "the woman" in Holmes's life.

Played here by Lara Pulver, seen this autumn in the final series of Spooks, she now walks in the shoes of Lady Heather - the recurring character from CSI (Melinda Clarke), as a high-end professional dominatrix known in some circles as "The Woman". Sherlock's services are required by his brother Mycroft (Mark Gatiss), on the behalf of the government, to handle a delicate situation where she could compromise a young female member of the monarchy. But Holmes and Watson have to face the most glamorous adversary, CIA agents, international terrorism, and a X-Files type state conspiracy where Mycroft does a Cigarette-smoking man tribute act.

Director Paul McGuigan brings back the on-screen text and adds a deduction sequence which will sound familiar to the fans of Hustle, but credits must be given to him and director of photography Fabian Wagner for the cinematic feel of this episode. Some may prefer the less obvious game of seduction by Gayle Hunnicutt as Irene in The Adventures of Sherlock Holmes (1984) and Andrew Scott may not fit the traditional image of Moriarty - which is precisely why he's a smart choice. The episode sometimes stretches to reach its duration and Steven Moffat, who knows how to pen good lines, cannot resist a few easy tricks of the kind he uses in his Who finales.

Kudos to the BBC for starting the new TV year with a drama eagerly awaited by its fans. Though a few of us will be allowed to search something else for the second best thing since the invention of running water. Sherlock is produced by Hartswood Films for BBC Wales (with US pubcaster PBS's Masterpiece).

Nice review of the episode.

For a different look at this episode, check out my review .