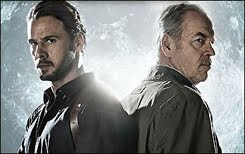 Andreas Wolff is back. Left dead in the finale of the long-running German crime drama Wolffs Revier, the Hauptkommissar returns in a TV movie called Wolff - Kampf im Revier.
Wolffs Revier ran from 1992 to 2005 on private channel Sat.1 and concluded with a 90-minute special, Wolffs Revier: Angst, in May 2006. Created by the great scriptwriter Karl Heinz Willschrei (Tatort, Der Alte, Ein Fall für Zweï), it starred Jürgen Heinrich as Wolff. Klaus Pönitz was his partner Günther Sawatzki, later replaced by Steven Merting as Tom Borkmann. And Nadine Seiffert was Wolff's daughter Verena. The theme intro was composed by Klaus Doldinger.

« I can't bring people back from the dead. It's not a pretty picture. I DON'T LIKE DOING IT! »

The channel should have followed the wise words of Aladdin's genie instead of commissioning this disappointing Wolff - Kampf im Revier. Heavily injured five years ago, Andreas Wolff endured a coma, a painful rehabilitation, and now he works as a lecturer at the police academy. But he struggles to cope with his everyday life with an addiction to drugs. Worse, he becomes the #1 suspect in a murder case. Actually the idea to age Wolff in full Horst Schimanski mode is really smart. Except that the excellent Jürgen Heinrich is treated like a guest star in the revival of his own show.

Intended as a pilot, the TV movie is mainly centered on Kommissar Marck (Stephan Luca), a former student of Woff, and his new partner Vicki (Nadeshda Brennicke). With a little time and less running, Marck could certainly do well in one of the Tatort series from ARD. The problem is that Kampf im Revier is "sold" with Wolff's name in front of it. At least Heinrich, rather impressive in the action sequences, has some fun doing the White Rabbit. Back as Verena Wolff, quasi-mute Nadine Seiffert has less luck in a nod to the Saw movies.

Produced by Producers at Work for Sat.1, Wolff - Kampf im Revier is written by Anna Dokoupilova (Der letzte Bulle, Doktor Martin) with additional script work by Annette Simon, and directed by Christian Alvart. A sour return with a sour ending, anyway it seems ratings will spare us a series.