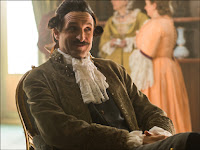 [Spoiler-Free] The second series of El Ministerio del Tiempo came back on April 25 after a three-week break.
In 1734, a commando led by Lola Mendieta raids the Royal Alcázar of Madrid, the residence of King Felipe V, before the fire which devastated it the same year. They steal the paintings and replace them by forgeries. Meanwhile at the Ministry, the great Diego Velázquez writes another of his resignation letters when he learns about the auction of one of his works (via an alert on his mobile phone!)

The thing is that this painting was amongst those destroyed in the fire of the Alcázar. Salvador Marti sends Irene and Velázquez to the court of Felipe V in 1734 in order to investigate this case of "intertemporal art trafficking". They meet the Queen, Isabel de Farnesio, who's the de facto ruler of Spain because of the poor mental health of her husband. Of course, old foes of the Ministry of Time are behind the heist: the American company Darrow. Lola learns that her colleague Paul Walcott is severely ill. What he tells her from his hospital bed prompts Lola to have a talk with Ferguson, the chief of Darrow.

Anaïs Schaff and Abigail Schaff are the content coordinators for Cliffhanger TV. Music composed by Dario González Valderrama. The three-week pause of this second series, which was supposed to return (according to some initial plans) in September, certainly didn't help the already declining ratings. The episode caught 1.911.000 viewers (9.9%). Unfortunately the launch of El Embajada, the (lacklustre) new series of Bambú Producciones for Antena 3, did the rest.