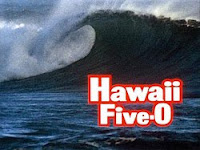 [4.56 - French Time] Read on the blog of television wizard and author extraordinaire Lee Goldberg (his wife is French):

The last time the network tried to revive the classic with Jack Lord I gave my humble opinion (http://tattard2.blogspot.com/2008/08/young-barnaby-jones-chronicles.html) and should another new new version be written by William Shakespeare or Michael Crichton back from Heaven I would not change a word.

Go to Lee's blog, there's the intro for the unaired Hawaii Five-O pilot with Gary Busey. With all the respect due to Stephen J. Cannell and Gary Busey it reminds me of Tropical Punch with Adam West.
Publié par Thierry Attard à l'adresse 04:56