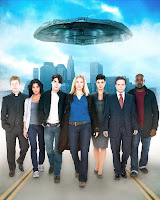 The Uh-Oh season, officially opened with the departure of FlashForward's co-showrunner/executive producer Marc Guggenheim, continues with another hyped entry from ABC: the 2009 reboot of V - the classic alien invasion miniseries by Kenneth Johnson.

According to The Live Feed, a blog of The Hollywood Reporter, the network cancels its ambitious plan to cover the skies of 15 major American cities with giant red "V"s to promote the debut of V on November 3 (http://www.thrfeed.com/2009/10/abc-scraps-plans-for-v-skywriting-campaign.html#more). After the announcement of the PR stunt, Lisa de Moraes wrote a column in the Washington Post where she estimated the impact of the operation on the environment (1).

Honestly, why should we care of the environment when lizards are [Major Spoiler Alert for our readers under 40] going to eat us all anyway. Last month came the news that the new V will go on hiatus after only four episodes (http://www.digitalspy.co.uk/cult/a179211/v-to-go-on-hiatus-after-four-episodes.html). Now this.

But to be perfectly fair with ABC and the people in charge of the promotion of the show, note that the network made the first eight minutes of the pilot available (http://www.thrfeed.com/2009/10/the-first-eight-minutes-of-abcs-v.html). This pilot and the first episode are directed by the respectable Quebecois director Yves Simoneau, who directed the pilot of The 4400 in 2004 for the same producer, and the excellent thriller Blind Trust (Pouvoir intime, 1986) (2).

At least we know what caused all that chaos in the Flashforward pilot: the giant face of the charming Morena Baccarin smiling on the huge flying screen of the mothership.