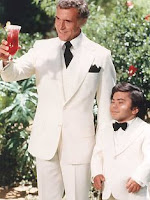 [22.58 - French Time] Mark Burnett (Survivor) and Sony Pictures Television have announced, during Mipcom in Cannes, that they're going to turn Aaron Spelling's cult series Fantasy Island (1978-1984) into a reality TV programme. The original Fantasy Island starred Ricardo Montalban as Mr Roarke, the enigmatic host of Fantasy Island, a tropical resort where tourists paid to have their fantasies realized. Hervé Villechaize was Tattoo, Roarke's assistant, and provided the comedy.

The show was a companion of another hit from Spelling, The Love Boat, and both shows were on ABC. The format of the reality series will follow 12 contestants as they compete for a job running an exotic island, by making other people’s dreams come true, as new guests arrive at the hotel in each episode with fantasies that must be fulfilled (http://www.c21media.net/news/detail.asp?area=74&article=52266).

Morphing a television fiction classic into a Reality show is not something new. Remember the short-lived Fame on NBC in 2003, or The Real Gilligan's Island (shown on TBS from 2004 to 2005). But in a difficult context for TV series writers (http://www.imdb.com/news/ni0779964/), unscripted out of scripted has some kind of irony.

Anyway the immediate problem of the Reality TV version of Fantasy Island could be that only the great Ricardo Montalban and the popular Hervé Villechaize made the original show watchable past the first pilot - superbly written by Gene Levitt in 1977 - but this time one candidate will be chosen as the star performer for the week (http://www.hollywoodreporter.com/hr/content_display/news/e3i29ea94e0c3808472b24bc1b01e11cacd).

And it's not easy to walk in Montalban's shoes. Ask Malcolm McDowell, who played Roarke in the 1998 Fantasy Island revival. Maybe McDowell or Terence Stamp could host the new show?
Publié par Thierry Attard à l'adresse 21:42