FEAR IS THE KEY 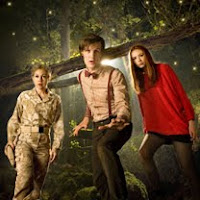 [7.00 - French Time] Doctor Who - Flesh and Stone (Series Five, Episode Five): The Doctor (Matt Smith), Amy Pond (Karen Gillan), River Song (Alex Kingston) and the paramilitary clerics are trapped on spaceship Byzantium and the Weeping Angels want them no good at all.

Escalation of pre-watershed psychological terror continues in this conclusion of last week's story (The Time of Angels), thanks to screenwriter and Doctor Who showrunner Steven Moffat and to director Adam Smith. Let's hope Smith will have some time to direct a Christmas special before a Hollywood studio like Lionsgate lures him with a tempting offer.

As if hide and seek with Angels was not enough, the Moff engages us in a scary walk into the dark and deep woods where the cleric team leader's fate is by far the most indulgent (to have never existed is worse). Octavian faces death both with all the grandeur of the experimented soldier and the conviction and faith of the priest. Iain Glen deserves a BAFTA or something for this scene (« I think sir, you know me on my best »).

« How's life? Sorry, bad subject. » What Matt Smith has achieved in only five episodes is remarkable. It's very refreshing to see his Doctor being sarcastic or angry (« WHAT ELSE HAVE YOU GOT? ») and it's fascinating to see bits of Patrick Troughton, William Hartnell or Peter Davison in such a young actor.

Steven Moffat dynamites one irritating trademark of modern Who in his vaudevillesque epilogue: the prospective romance between the Doctor and his female companion. Remember Moffat wrote Coupling (2000-2004) and that Karen Gillan was the sexy team member of The Kevin Bishop Show (2007-2008), the provocative Channel 4 sketch comedy show. Best line in this scene: « About WHO I want ».

« Time can be rewritten ». There are cracks everywhere, something about Amy and River Song will kill someone. Experience shows that in contemporary Doctor Who sophisticated story arcs must be handled with extreme care, or this would add to the list of potential threats against the Doctor. With Graham Norton, budget cuts, or The Vampires of Venice at 6.00pm (British time) next saturday.
Publié par Thierry Attard à l'adresse 09:44