REX IS NOT THEIR LAWYER 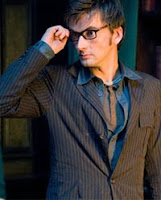 [8.58 - French Time] According to Deadline.com's Nellie Andreeva, the pilot of Rex is not your Lawyer "is not going forward" on NBC.

With David E. Kelley's legal drama slated by the network for 2010-2011 midseason and Garza (with Jimmy Smits as a Supreme Court Justice) certainly picked up, it seems that David Tennant as a top Chicaco lawyer with panic attacks would make too much men of law for the Peacock.

In January your humble servant wrote: « Maybe David Tennant (ex-Doctor Who) should wait before moving to Los Angeles as he's starring in a pilot called Rex is Not your Lawyer, or maybe NBC will be crowded with "unconventional" lawyers next season ».