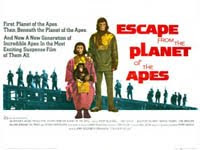 [10.02 - French Time] More about Rise of The Apes, the incoming prequel of Planet of the Apes, on THR.

James Franco plays a scientist working on a cure for Alzheimer’s that is being tested on apes. The test subject named Caesar evolves rapidly, and the hero takes him home to live with him and protects him from other scientists. Freida Pinto (Slumdog Millionaire) will play a primatologist and John Lithgow will be the hero's father, who has Alzheimer's.

As if Tim Burton's Planet of the Apes (2001) was not enough... Your humble servant will pass on this one. Filming of this movie, directed by Rupert Wyatt, will start this summer and before that James Franco will return to ABC's venerable soap opera General Hospital.